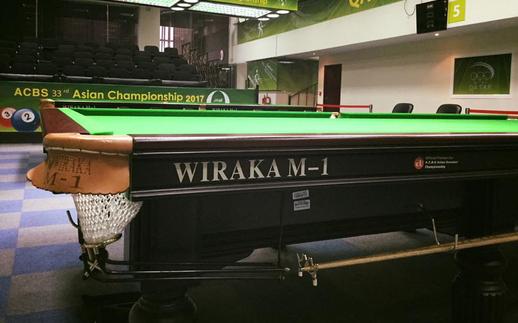 The line up for the Knock-Out stages of the 2017 ACBS Asian Snooker Championship is now known following the conclusion of the Round Robin Groups in Doha.

Those featuring in the Last 32 include all the pre-tournament favourites. The multi-talented Pankaj Advani of India made light work of qualifying when winning all three of his fixtures with the loss of just two frames. Advani has been a three-time runner-up of this event before.

Powerhouse nations of the sport, representatives of both China and Thailand have been untroubled so far. Lyu Haotian and Li Yuan both topped their groups unbeaten, as did Issara Kachaiwong and Thanawat Tirapongpaiboon.

The winner of this championship - now in its 33rd year, will also be offered a two year professional tour card onto the World Snooker circuit.

For all the results, please visit the Asian Confederation of Billiard Sport's tournament results page here.

Picture above is courtesy of Paul McKeowan

Written and published by Michael Day on the 25th April 2017