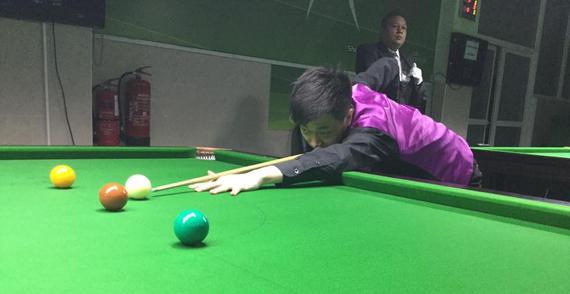 Lu will be rewarded with a guaranteed two year tour card following his success in Doha this past week. It means a return to the top tier for the teenager who had pro status during the 2013/14 & 2014/15 campaigns because of his 2013 IBSF World Under 21's Championship win.

In what was the 33rd edition of this continental championship – that has previously been won by James Wattana and Ding Junhui, there was very well spread representation with players from 22 different countries taking part.

Lu had no issues in qualifying top from his group with 3 wins out of 3. In the Knock-Out section of the event he then went on to defeat Daegyu Lee (South Korea) 4-0, Mohammad Rais Senzahi (Afghanistan) 4-1, Keen Hoo Moh (Malaysia) 5-4 and Mohamed Shehab (United Arab Emirates) 5-3 to book his final berth.

His opponent in the final would be India's multi-talented and decorated Pankaj Advani, who had been in clinical form throughout, remaining undefeated and incredibly dropping just 4 frames in 6 matches!

A clash of youth and experience, it was the youngster, though, who bridged the 12 year age gap following a 6-3 victory in the final. He constructed breaks of 65, 57 and 102 in the process.

For Advani it meant yet more pain in this tournament having also finished as the Runner-Up in 2004, 2012 and 2015. A 16 time World Champion in various disciplines and formats, Pankaj has still to claim this continental title.

Despite China's dominance on the Worldwide Amateur scene in recent years, Lu becomes the first player from his country to lift this trophy since Jin Long did in 2008. China's other entry, Li Yuan, had lost at the Last 32 stage. Li made the highest break of the week with an effort of 129.

​Xu Si won the latest edition of the World Under 21's, whilst Yuan Sijun claimed the Asian Under 21's title only a few weeks ago. The band of promising talent from the Far East in the professional ranks continues to increase.

Picture above is courtesy of Paul McKeowan.

Written and published by Michael Day on the 28th April 2017