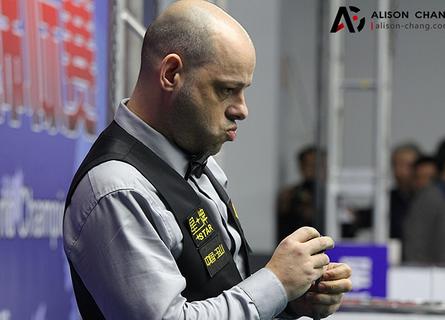 There was a great deal of drama and intrigue during the opening day of the main stages in the 2017 Chinese Pool World Championship.

Following on from last week's brutal qualifying rounds, the remaining 64 players (minus the withdrawal of the USA's Mike Dechaine) were split into two separate sections consisting of 'International' and 'Domestic' entries. Note - there were some amendments to both sections because of uneven numbers.

Until the Last 32 the format is double elimination, basically meaning players need to win 2 out of 3 matches to make the knockouts.

In the overseas half of the draw, last year's runner-up Mick Hill got his campaign off to a fine start with a 9-7 victory over Alex Pagulayan, but was then pushed to the losers bracket when going down to Wu Jia Qing 9-4.

2015 winner Darren Appleton was taken all the way by Iran's Mohammad Ali Pordeliri in a 9-8 opening round win. This set up a mouthwatering tie with fellow Brit and Mosconi Cup team mate Jayson Shaw, who himself had come through a hill-hill climax against Steve Martin.

Given the closely matched profiles between the two, the affair was predictably tight with Appleton just ousting it in yet another deciding frame thriller.

Invited top 16 snooker professionals Mark Williams and Joe Perry had an awful day which saw them lose both their matches; therefore meaning elimination from the event at the earliest possible avenue.

The host nation's reigning champion Shi Hanqing began his title defence strongly with a brace of 9-3 and 9-6 wins.

Of the active English Pool stars still in, there were mixed fortunes.

Former IPA World Champions Gareth Hibbott and Jack Whelan lost their first match-ups, but immediately bounced back with success on the B Side.

Clint I'Anson and Steve Petty went unbeaten, whilst Martin recovered to stay in the chase too.

Both American hopes Corey Deuel and Brandon Shuff are still present. Deuel went 2 out of 2 to progress, whilst Shuff lost first up but then fortuitously received a bye because of fellow countryman Dechaine's absence.

Two time World Chinese 8 Ball Master Yang Fan dropped just a total of seven frames as he eased in to the KO portion.

Picture above is courtesy of Alison Chang. alison-chang.com (Taiwanese Passion for Pool)

Written and published by Michael Day on the 13th March 2017