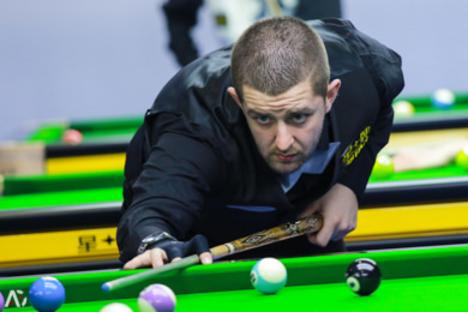 ONLY AN OCTET OF PLAYERS LEFT - DAY 2 REVIEW

After just 2 days of intense action in Shangrao City, only 8 players from an original field of 63 remain in the race to become the 2017 Chinese Pool Men's World Champion.

We are now certain of a new name on the trophy following the Last 32 eliminations of Shi Hanqing and Darren Appleton. Shi's title defence was ended by Phone Myint Kyaw (Myanmar) 11-3 whilst 2015 winner Appleton lost to Liu Haitao 11-6.

5 of the 8 remaining players left are from the host nation - Yang Fan, Gong Haifeng, Chu Bingjie, Zhu Long and Liu.

Two time World Chinese 8 Ball Master Yang has remained unbeaten on his route to the Last 8. He has arguably been the most impressive player so far having dropped just 15 frames in his four matches.

Eight players from Great Britain started the day, but come the end of it, only Scotland's Jayson Shaw and England's Mick Hill are left; both players coming from the 'B Side' in the Double Eliminators.

Shaw sealed his Quarter-Final spot with a trio of victories on Tuesday over Jack Whelan, Clint I'Anson and Ko Pin Yi.

The only other non-Chinese entry left is Kyaw, who continues to go somewhat under the radar despite some very positive results.

Wednesday will see the completion of the Quarter-Finals, Semi-Finals and the 3rd/4th Place Play-Offs.

Picture above is courtesy of Alison Chang. Please visit her site www.alison-chang.com

Written and published by Michael Day on the 14th March 2017