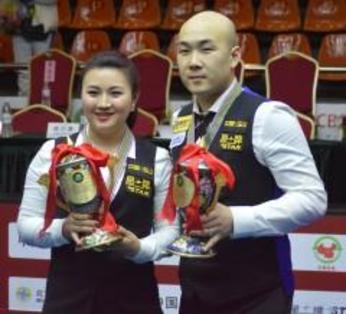 It was a thrilling final day to the 2017 Chinese Pool World Championships which saw both the Men's and Women's events nearly go the entire distance.

For the first time all four finalists were from the host nation. All four were also appearing in the final for the first time, in what was the third annual edition of this tournament.

​In the Men's event, Yang Fan came back from an early deficit in the first session to eventually get the better of Chu Bingjie 21-19.

Yang, winner of the World Chinese 8 Ball Masters in 2015 and 2016, becomes the first player ever to win the two most prestigious championships in the sport.

​Fu Xiaofang also had to recover from going behind to Yu Jinpeng in the female division. Fu gathered some momentum towards the end of the first session to only trail 7-9.

Returning later in the day for the conclusion, Fu got the match level and the tie would then escalate to a deciding frame at 16-16.

Fu went for the title in the 33rd frame but couldn't dispatch the 8 Ball. However, when Yu botched a safety in an attempt to leave the 8 Ball not viable, she gifted Cue Ball in hand which her opponent duly translated into victory.

The profile of this tournament continues to grow within the Cuesports community, although crowd numbers were apparently down from previous years.

In the last two years we have seen top snooker professionals such as Ding Junhui, John Higgins, Mark Selby, Neil Robertson and Graeme Dott take part which obviously had a positive impact on audience numbers. This year only Mark Williams and Joe Perry were present for the main stages; but they were eliminated on the first day after both losing their opening two matches.

There was a lot of UK participation in last week's qualifying schedule. The UK players did themselves proud and racked up a number of victories, but the final stages were, as expected, pretty much dominated by players from China.

The final of the inaugural edition in 2015 featured a cracking final between Darren Appleton (who won) and Mark Selby. In 2016 Mick Hill was ousted in a deciding frame by Shi Hanqing.

Jayson Shaw was the top performing Brit this time round after reaching the semi-finals and then winning the 3rd/4th place play-off for the Bronze medal. It was a big result as it put him top of the WPA World Rankings for the first time in his career.

In order for other UK players to build on this success, more proper playing equipment needs to be installed in UK clubs so the right conditions are simulated. At the moment, these are few and far between.

It is alleged (via Darren Appleton's Facebook page) that next year's championship will boast a top prize of $200,000. With money also being significantly boosted in the World Masters, Chinese 8 Ball could rapidly become a serious and attractive proposition to a wide selection of Cuesports competitors.

I am aware that both these events are run and sponsored by rival companies in the business. I would however like to see a unified worldwide tournament structure in the near future that gives a fair opportunity to all.

Time will tell, but Chinese 8 Ball certainly has the potential to grow.

Picture above is courtesy of AZBilliards