HANEVEER HOLDS ON TO TAKE TITLE

It was a generation game in the final of the inaugural DMT Belgium Open, as 40 year old Bjorn Haneveer beat 12 year old rising star Ben Mertens.

Yet more evidence of the enthusiasm and participation that is going on in mainland Europe in regards to snooker, this new tournament featured entries from France, Holland, Turkey, Malta and a large chunk from the host nation.

Former professional Haneveer - who reached high as 53 in the World Rankings, fell 5-3 down to his fellow Belgian in the final. However, aided with a break of 116, he recovered to take the last three frames for a 6-5 victory and pocket 1,400 Euros.​ In the Semi-Finals he defeated 20 year old Maltese prospect Brian Cini 5-1.

Haneveer also constructed the event's highest break with a 142. In total there were 4 centuries - Cini made a 128 and Jurgen Van Den Bossche (Belgium) had a 101.

​Mertens potentially has a bright future ahead of him in the sport. Despite not even being a teenager yet, he crafted a string of very handy scoring contributions, including a 97 in his Last 4 win.

Tournament organiser Gery De Mol works with Mertens and several other talents in Belgium. Perhaps the success of Haneveer, and more recently Luca Brecel, have inspired players from the country to take up snooker.

Coverage on Eurosport and the significant interest for the previous Antwerp Open have also surely been factors too.

Many thanks to Tournament Director Gery De Mol for the added information and the above photograph. The referee in the image is Jan Scheers.

Written and published by Michael Day on the 29th May 2017 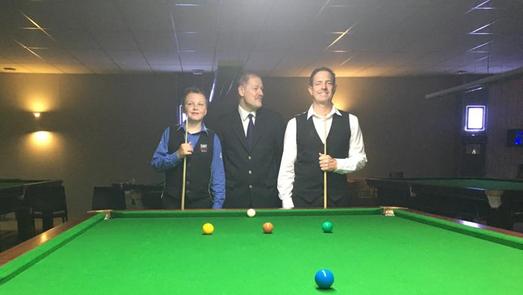