Over 60 players from 15 different nations began the event in Shengjin, Albania. The field was initially split into Round Robin groups of 3 or 4, with the top 32 players qualifying for the Knock-Outs.

His opponent for the title was England's sole representative, Wayne Brown, who was also undefeated throughout. However, Kristjan emerged a 5-2 victor.

Helgason has been in terrific form recently. Only a few weeks ago he won the Icelandic National Championship when beating his opponent 9-0 in the final. Earlier in that event he made a 147 and three other centuries during the same best of 9 match.

This isn't the only event to take place at the Rafaelo Resort – attention now goes to the European Masters, Ladies and Team Championships.

Starting today, though, is the European Snooker Open, where the winner will get automatic entry into the venue stages of the Riga Masters professional event next month. Last year's winner was Darren Morgan, who sensationally went all the way to the Semi-Finals before losing to eventual champion Neil Robertson.

The image above is from the Facebook live coverage of the final, provided by the Albanian Snooker Federation. Check their page out here.

Written and published by Michael Day on the 2nd June 2017 ​ 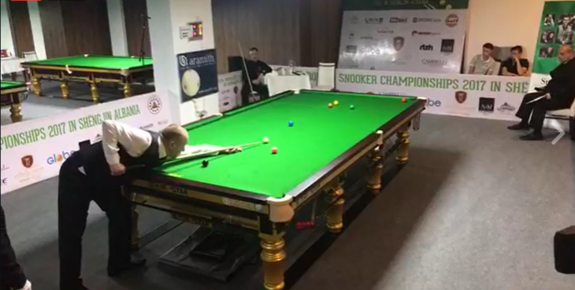