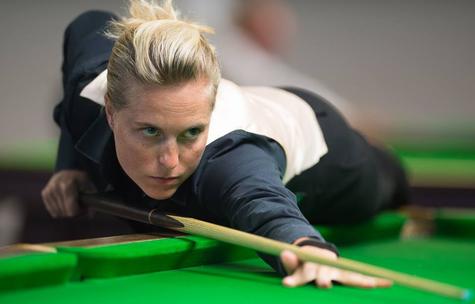 ​Following on from the European 6 Reds and Open Snooker Championships held last week, more individual honours were awarded in Shengjin this weekend with the pre-tournament favourites in both the Ladies and Masters divisions defending their titles.

Belgium's Wendy Jans once again proved too strong for the opposition as she collected her 11th European Championship.

A 6 time World Champion, the 33 year old dropped just a solitary frame throughout the entire tournament. She began by topping her Round Robin after wins over Monica Manolache (Romania), Yana Shut (Belarus) and Idit Bnaya (Israel).

In the Knock-Outs, Jans defeated fellow countrywoman Iris Moyens 3-0 in the Last 16, Anastasia Nechaeva (Russia) 3-0 in the Quarters, and then another Russian, Daria Sirotina, 4-0 in the Last 4. Sirotina had been the runner-up to Jans in the last two editions of this event in Prague (2015) and Vilnius (2016).

Darren Morgan repeated his success of Lithuania last year by doubling up with glory in the European Masters. Only last week he retained the European Open, and for the third year running he was the best in this category too.

The former professional World Number 8 topped Group F, but had to come back from 2-0 down to Finland's Mika Hummelin in a 4-2 win in the Last 32.

Ireland's Stephen Walsh was eliminated 4-1 in the Last 16 and then another Irishman in the form of ex top tier player Michael Judge was dispatched 5-2 in the Quarter-Finals. Last week's 6 Reds finalist Wayne Brown (England) was beaten 5-0 in booking his final berth.

It would be an all-Welsh affair in that final with Elfed Evans in the opposite chair. Evans chalked up the opening frame, but former World Professional Seniors Champion Morgan ran out a fairly comfortable 6-2 victor for yet another entry on his snooker CV.

Iceland's Crucible Qualifier, and the new European 6 Reds Champion, Kristjan Helgason made the highest break of the competition with an effort of 123.

The action hasn't quite finished in Albania. Sunday will see the conclusion of the three team events.

​Picture above is courtesy of Monique Limbos

Written and published by Michael Day on the 11th June 2017​