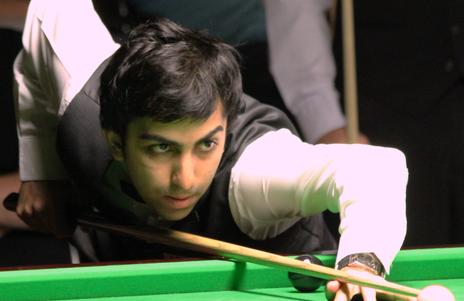 Pankaj Advani is still on course to become the first ever three-time winner of the IBSF World Amateur Snooker Championship after qualifying for the Last 64 Knock-Out Rounds in Qatar.

The Indian, who claimed this title in 2003 and 2015, won all 4 of his Round Robin fixtures and had an overall frame aggregate of 16-2. He shared an identical top performing record with Welshman Andrew Pagett, last year's Runner-Up here, but due to a random draw number he progresses through as the Number 1 seed.

Australia's Steve Mifsud, another former champion, is the Number 3 seed whilst 15 year old Florian Nuessle (Austria) also boasted a 100% record in being confirmed as the Number 4 seed.

​Chinese teenage duo of Fan Zhengyi (8) and Luo Honghao (40) both made it through. Fan, the reigning IBSF World Under 21 Champion after defeating Luo in their homeland a few months ago, has been very impressive so far in registering four century breaks - more than anyone else. The current high break leader is Advani with 138.

Former professional Brazilian duo Igor Figueiredo (14) and Itaro Santos (33) are fancied to do well in Doha. They continued on their quests; 2009 finalist Figueiredo constructed a 136 on route.

In the Men's event this year there were no English, Scottish or Northern Irish players, although the Welsh quartet of Pagett, Rhydian Richards, Jack Bradford and Matthew Roberts are all still in with a shout.

Republic of Ireland could also celebrate a clean sweep of qualifiers with Brendan O' Donoghue, Ross Bulman and Karl Fitzpatrick.

These Knock-Outs rounds carry on until Monday when we find out who the 2017 Champion is.

Written and published by Michael Day on the 22nd November 2017