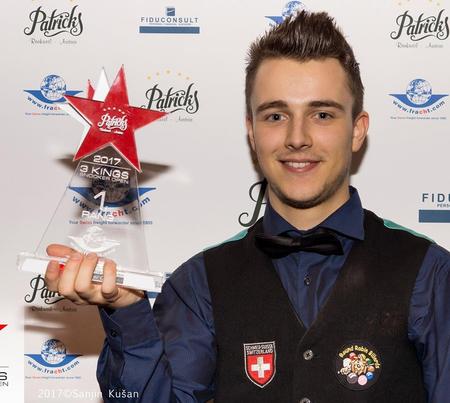 Swiss youngster Alexander Ursenbacher once again highlighted his potential in winning the 11th annual International 3-Kings Snooker Open - and by making a 147 break along the way too.

A total of 60 players, representing 10 different countries, travelled to Rankweil. Predominantly an amateur contested event, famous names of the sport such as Tony Drago, Stephen Lee, Dominic Dale and Luca Brecel have all been previous champions.

​The four day tournament began with the field being split into 16 Round Robin Groups. The top two from each would then advance to the Last 32 Knock-Outs.

​World Number 75 Martin O'Donnell - the only current full time pro to enter this time around, was upset by home player Paul Schopf 3-1 in the Last 16. Schopf, however, did play for his country during World Snooker's 2015 World Cup in China.

Despite this, the headlines were already dominated by 20 year old Ursenbacher, who completed a 147 maximum break during his 2-0 Last 32 victory over Felix Frede (Germany). It was the first time he had achieved the feat in competition.

Come the Last 4 on 'Finals Day Saturday', there was a strong line-up which involved all the players having had some sort of experience in top tier events. Each was also from a different nation.

The final would bring together two former professional players; although with a 20 year age gap between them.

The junior of the pair continued his brutal break-building form by rattling in a 140 during the first frame - actually missing the last black for another 147! Haneveer, the 2009 winner here, levelled it up on the black in Frame 2, but further efforts of 50, 43 and 72 saw Ursenbacher coast to a 5-1 success.

Ursenbacher gained professional status when qualifying via 2013 Q-School as just a 17 year old, although was relegated off the tour after his two seasons were up.

Since then he has continued to compete in tournaments where eligible, and has recently come close to returning to the tour. Only last year he narrowly missed out in Q-School at the last hurdle, and was pipped in a deciding frame during the IBSF World Under 21's Championship in Belgium.

As well as the before mentioned breaks he made, he also had a 135 - meaning Ursenbacher crafted four breaks of 130 or more.

For more information, and the full results of the event, please visit the 3 Kings website here.

​​​Written and published by Michael Day on the 7th January 2017