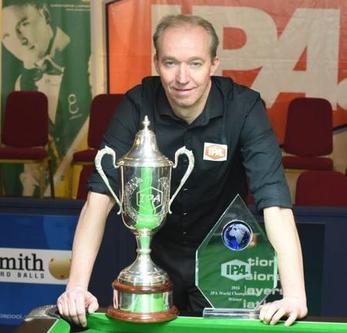 A PREVIEW OF THE 2017 IPA WORLD CHAMPIONSHIPS

The 4th annual International Professional Pool Players Association (IPA) World Championships begin this week at the Bradford Hotel in England. Five different titles will be contested for, in what will be an exciting exhibition of Blackball Rules Pool.

Defending Singles Champion Gareth Hibbott won the title here 12 months ago in the most dramatic fashion when ousting Craig Marsh by a deciding frame in a pulsating final.

The Englishman has had a successful reign as World Champion since which saw him pick up silverware at the English and British Opens on the IPA Tour, and the Northern Ireland Open and Pro double during the inaugural Ivan Simonis World Series.

Pre-tournament favourite Marc Farnsworth will be keen to put things right after a surprise early exit in last year's edition. The current Professional Number 1 ranked player had a fine 2016 campaign which included him winning the Scottish Open and Pro titles, as well as the Malta Open World Series Event.

Not allowing himself to dwell on his runners-up finish last season was Wales' Marsh. He claimed European and Gibraltar Open crowns, whilst also banking cheques in the English and South African Professional competitions.

Such is the quality of the field, though, there are a number of deserving in-form candidates who should be mentioned as title contenders too. Dan Davy, Jon McAllister, Simon Ward, Ronan McCarthy and Jason Twist all won on the IPA circuit in some form last season, as too did 2015 IPA World Champion Jack Whelan.

Clint I'Anson, Jordan Shepherd, Neil Raybone and Ben Davies are other professionals towards the top of the outright market for the Championship.

The IPA's top 32 seeded players automatically advance to the Last 64 of the tournament. They will be joined by another 32 players who have to make their way through the brutal qualifiers.

Michael Oliver was the tour's top ranked Amateur player in 2016; mainly helped to that title with a victory in the European Amateur.

Away from the IPA set-up, players involved in early round action include 2016 Players Amateur Champion Craig Lakin and 2016 Savanna 250 Champion Max Nosko - although Nosko has an exciting Preliminary Round encounter with Batten.

There is also a vast number of major international event winners in the field (too many to mention!), as well as entries representing different nations.

One of the most intriguing of those is former World Number 5 professional snooker player Stephen Lee. It will be interesting to see how Lee copes with the smaller table challenge; he certainly has some previous knowledge of the rules and tactics required. He gets his bid underway on Tuesday morning.

Parallel with the continuing progression of the IPA Tour, this year's winner purse has been upped to £10,000.

Besides the Open Singles, the Ladies, Seniors, Doubles and Mixed Doubles Championships will also be played for during the six days at the Yorkshire venue. Players are not restricted to just one category (providing they are eligible), therefore there will be plenty of action on show.

Reigning two time female champion Deb Burchell is back attempting to win a hat-trick of titles, whilst the legendary Jason Twist is in exactly the same position in the Over 40's. Both sections have expanded in quality and it is tougher than ever to call a winner.

Not content with claiming just the World Singles, Hibbott also won the World Doubles with partner Dean Shields in 2016. They are back to defend their championship, although there is a whole clutch of hopefuls with the tools to dethrone them.

The Mixed Doubles is a new concept for 2017 and will add a different dimension to the proceedings this time around.

To keep up to date with all the news and results, please like The Cue View and IPA Facebook pages for regular updates.

Written and published by Michael Day on the 29th January 2017