​MASTERFUL POTTS IS A HAT-TRICK HERO

Gareth Potts held his nerve in a dramatic Black-Ball Shootout to win the 2017 JOY World Chinese 8 Ball Masters. After his victories in 2013 and 2014, it means a trio of titles for the Englishman, therefore making him the outright most successful player in the history of the event.

So often throughout his illustrious Cuesports career Potts has been the youngster 'changing the guard' in major finals. However, in today's Championship match he faced the previously unbeaten 20 year old Zhang Kunpeng; a rising star opponent 13 years his junior.

Having won 6 straight matches to come through the Winners Side of the draw, Zhang had the luxury of the weekend off in Qinhuangdao. In stark contrast, Potts had slogged his way through the Losers Section, in total coming through 9 matches on route.

Perhaps this was a factor during the early stages of the 140 minutes final. Despite not doing a great deal wrong, Potts found himself 5-1 down come the time out interval.

Needing to get a foothold quickly on the resumption, he managed to close the deficit to 5-3, but a plethora of fine shot making put the home cueist 7-4 back in front.

Then maybe a turning point in momentum - and the match. On a potential break and run which included yet more clean striking, Zhang missed a straightforward 8 Ball into a middle pocket. Inconclusive, the Chinaman may have suffered a kick.

Either way, this proved a mini catalyst for his thankful rival. Clearing up to make it 7-5, Potts capitalised in winning the next three frames to move ahead for the first time at 8-7.

Now on a roll himself, the eventual champion would suffer a similar fate when plum in the balls during Rack 16. Zhang levelled, and then received another gift in the next to go back in profit at 9-8. This then became 10-8.

The next two frames were squared to leave the score 11-9 to the maiden finalist. With time now a major factor, and of the essence, Potts had to respond quickly. Like the champion he is, he chalked up the 21st rack before coolly fashioning a clearance (in what would be the last) when a miss would surely have been the end for him.

On sinking that 8 Ball to tie it up at 11-11 there was barely a minute on the clock remaining. Both players agreed to move on to the inevitable Black-Ball Shootout.

With the pressure, and extreme difficulty of the shot itself, it would understandably be a low-scoring affair. Potts won the lag and elected to go first, just like a football team would generally do in a penalty shoot-out.

After 4 attempts each, the score was once again tied at 1-1. Now effectively in a sudden death situation, Gareth was able to cut the black in for a 2-1 advantage with his last regulatory visit.

Now requiring to pot to stay alive - although a brave effort, Zhang was unable to extend the drama.

It was clear to see what it meant for the emotional winner. With the demise of defending two-time champion Yang Fan on Day 2 of the competition, 'The Golden Boy' knew he could break clear once again at the top of the all time honours list. Gareth Potts did just that.

​Thank You for your support during this tournament; for previous articles on it please go to the Professional Pool column.Please also like our Facebook Page here.

Written and published by Michael Day on the 16th January 2017​ 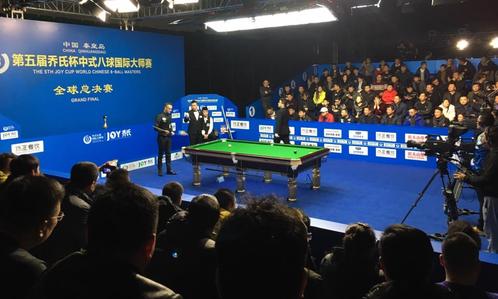