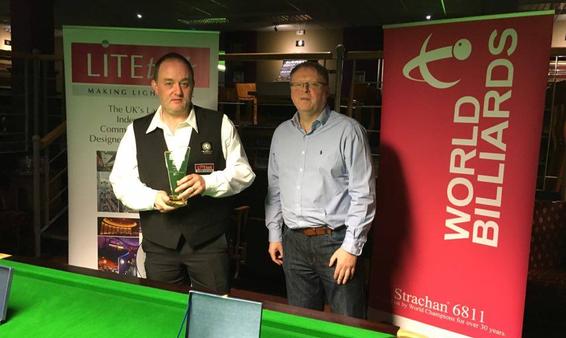 World Champion Mike Russell made a winning return to the World Billiards circuit with success over the Easter weekend in the 2017 LITEtask UK Open.

The Englishman, who now coaches and lives abroad, had not competed in an event since his Long Format World Title win at the same venue last October. He made up for lost time by banking the £960 winners purse.

Russell comfortably negotiated his Round Robin group; winning all 4 fixtures and making at least a century in each of them. A tremendous effort of 441 was constructed during his 1328-186 destruction of Glenn Yeo (Singapore) in the Last 16, whilst Quarter-Final opponent Phil Mumford was eliminated 754-454 - a result which included a run of 378 from the eventual champion.

​The tournament featured a high quality semi-final line up. The conclusion of the event would also produce high drama too.

Russell ousted form player Peter Gilchrist in a dramatic climax to their Last 4 clash. It had been close throughout the 2 hour encounter, but it looked as if Gilchrist's counter attack would come to fruition when on a break of 155. However, just 16 points behind with around a minute to go, Peter missed an in-off red which allowed Mike to cross the line 651-624.

The defeat ended Gilchrist's fine winning streak this 2016/2017 campaign that saw him claim the last three events on the calendar -  the Borders, Scottish and English Opens.

Dave Causier would be Russell's opponent in the final – a repeat of the World Championship final there 6 months ago. Causier, who was also unbeaten throughout the weekend in Leeds, booked his berth in the final with knockout wins over Eddie Duggan, Steve Brookshaw and Martin Goodwill in the Last 16, 8 and 4 respectively.

As perhaps predicted, the 3 hour showdown was tough to split with both players enjoying three figure leads at particular junctions in the tie. Causier had the opportunity to snatch it in the closing stages, but missed when on a break of 58. There were some more exchanges and chances to come, but it was Russell who finished on the right side of an exciting 946-915 outcome.

Causier had the consolation of making the event's highest break with the 479 he crafted earlier in the weekend.

In the Challenge Cup – for players not advancing through the earlier group stage, Nathan Mann beat Chris Mitchell 222-134 in the final.

Next month will see a big five day double header in Carlow, Ireland consisting of the LITEtask Irish and European Opens.

Written and published by Michael Day on the 18th April 2017