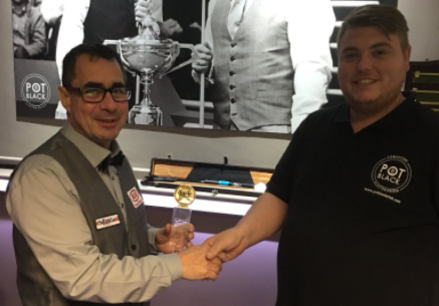 This was the last opportunity for amateur hopefuls, over the age of 40, to share the stage and limelight with household names such as Jimmy White and Stephen Hendry in Redhill later this month.

30 players began the two day knockout event at the Pot Black Club in Clacton-on-Sea. All matches were the best of 5 frames, although should a match reach two a piece, the unique Snooker Legends Black-Ball tie breaker was deployed.

54 year old Filtness held his nerve in a dramatic final against fellow ex-professional Nick Spelman. Having led twice, Filtness was pegged back each time and the tie-breaker came into play.

After their opening shots Spelman went for a long, extremely tricky pot into the yellow pocket, but missed. Filtness was left with an opportunity at a pot into the pink pocket, although it was difficult cueing with the cueball near, or even on, the baulk cushion.

However, Filtness coolly sunk the long range black to trouser the event's £500 top prize and book a berth in the main draw.

Throughout the weekend there were many exciting finishes; both Semi-Finals were decided on a Tie-Breaker. Filtness recovered from 2-0 down - making a 109 break in the process, against Geoff Williams, whilst Spelman ousted Qualifying Event 1 Runner-Up Simon Dent .

The final stages of the UK Seniors Championship will take place between the 24th-26th October at the Harlequin Theatre & Cinema.

The four qualifiers will initially play the 4 lowest seeds in a Preliminary Round. The winners of these ties will then face the top 4 seeds in the Quarter-Finals.

Written and published by Michael Day on the 8th October 2017