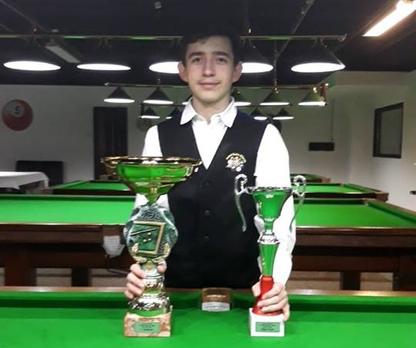 ​Players representing 11 different countries from Europe and beyond took part in the third annual edition of the Italian Snooker Open over the last few days.

Once again held at the Via Galvani 39 venue in Bolzano, this year's event was won by 15 year old Swiss cueist Luis Vetter for the first time. There were participants flying the flag for Germany, Hungary, Switzerland, Czech Republic, Austria, Croatia, France, Belgium, Iran, Japan and the host nation Italy.

​The teenager qualified for the Last 32 Knock-Outs after finishing second in his group behind Iran's Majid Gharehgozlou.

There he would face the undefeated Brian Ochoiski of France, who had eliminated former Austrian World Cup representative Paul Schopf 3-1 in the Semi-Finals. Ochoiski himself is just a youngster at 19 years old.

Vetter claimed the opening frame and then doubled his lead with the help of a 60 break. Ochoiski made a 47 in the process of getting on the board with Frame 3, but Vetter won the match on the black in the next to take the title, trophy and 1,000 Euros.

The 3,000 Euros event was organised by Tiziano Guerra. To find more about the tournament, and to see the full results, please visit the Italian Snooker website here.

Picture above is courtesy of Luis Vetter.

​Written and published by Michael Day on the 28th January 2018