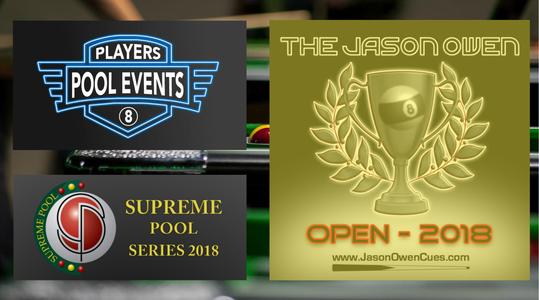 There will be several high profile First Round clashes at the greatly anticipated Jason Owen Open, the opening event of the ground-breaking Supreme Pool Series.

Conducted live on Facebook and YouTube, the 128 player random draw predictably threw up some mouth-watering ties given the strength and depth of the series. As with all this year's tournaments, the format is initially Double Elimination qualifying, with the final 8 competing a straight Knock-Out. The Jason Owen Open, which runs between the 4th-6th May, boasts a total prize purse of over £18,000 with £5,000 going to the champion.

Amongst the picks of the round is Shane Thompson v Jayson Shaw. Thompson is an ever-improving, hardened and successful player on both the tournament and money match scenes, whilst global cuesports superstar Shaw - World Blackball Champion in 2010, will be returning to his small table roots.

Another superstar making a return to English Pool after a sustained absence is Darren Appleton, he has also been handed a very tough assignment with professional Clint I'Anson; one of the most consistent performers on the IPA circuit this decade.

Shaw and Appleton's fellow Mosconi Cup winners and World Champions too, Chris Melling and Karl Boyes are back on the smaller table, they will face Scott Ross and Stefan Risidi respectively.

Undoubtedly one of the pre-tournament favourites will be two-time WEPF World Champion Tom Cousins, who meets the experienced Paul Riley first up, whilst another ex-World Champion Phil Harrison drew one of the eight 'To Be Confirmed' names in the last section.

The Supreme Pool Series exhibits past and present World Champions from both sides of the rules divide - Current IPA World Champion Ben Davies is paired with Rich Wharton in Round One.

The Jason Owen Open is the first of five events throughout the year at the Players Pool and Snooker Lounge in Stoke-on-Trent. The season ending Home Leisure Direct Grand Final will see the winner bank £40,000.

To see the draw in full, please visit the Players Pool Events group or the Beard Productions page on Facebook.