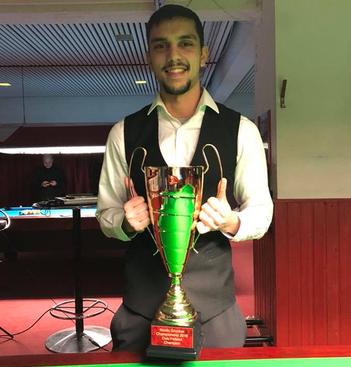 Now an annual date, the event featured players from all five Nordic countries - Denmark, Iceland, Norway, Sweden and the host nation for this year, Finland.

The 40 players were split into 8 Round Robin Groups of 5 (players from the same nation were seperated as best as possible) with the top 2 making the Last 16 Knock-Outs.

Sherif qualified second from Group A following 3 wins out of 4. From there he eliminated Juha Erkinmikko (Finland) 4-1, Esa Kaikumaa (Finland) 4-3 and then Sami Karttunen (Finland) 4-0 to reach the final.

There he faced the undefeated Daniel Kandi from Denmark. Kandi started his campaign strong making breaks of 105 and 102 in his opening group fixture. In total, the Dane lost just four frames on route.

However, it was Sherif who took control of the best of 9 final by crafting a 4-1 lead. Kandi recovered to 3-4 and had an opportunity to force a decider, but it was the Swede who emerged a 5-3 victor.

Sherif claimed 1,000 Euros for his efforts, whilst Kandi pocketed 500 Euros. According to his Facebook account, Kandi said he will use this amount towards Q-School.

​Semi-Finalists Antti Tolvanen and Karttunnen (both from Finland) picked up 250 Euros each.

Next year's event is scheduled to be in Stockholm.

Thank you to Belan Sherif for the above photo and information

Written and published by Michael Day on the 21th January 2018