Pool players from the South-West are excited about a new series of structured events to be held in the region this year.

The 2018 North Devon Blackball Series, played to Blackball Rules, will see five tournaments contested across the year, eventually culminating in a lucrative 'Grand Final' at the end of it. There is prize money on offer at each tour stop, with a bigger pot up for grabs at the Grand Final. ​

Urban Menswear brand HÖRFA are sponsoring and supporting the Tour; they have kindly donated quality watches as additional prizes from their range. You can visit their website here, where you are able to claim 10% off at checkout if you include the code CUEVIEW10

Despite being relatively rural, North Devon has a strong English 8 Ball heritage and is home to a number of well-known players. These cueists have given the Tour their seal of approval by signing up for it.

The stand-out entry is that of former two-time WEPF World Champion Jason Twist, who is one of English 8 Ball's greatest ever players. Having just turned 50, the Ilfracombe based star is still a strong force to be reckoned with having won back to back IPA World Seniors Championships in recent years too.

Father and son combination of Perry and Josh (pictured above) Durant are familiar names from the IPA circuit where both achieved professional status in their rankings. The Bideford pair will also compete on the Tour which will see two of the events held at their local venue of the Anchor Inn, which last year hosted the very successful North Devon Blackball Masters that saw £1,600 of prizes dished out during a one-day extravaganza.

Andy Coles is another popular figure in the area and beyond; 'The Beast' was part of the National Finals winning Devon A team at the EPA Inter-County Championships in 2016.

As well as money, players will accumulate ranking points per event which will determine their seeding for the Grand Final.

​"North Devon has an exceptional list of pool players. Some are well known, whilst others are yet to show their true colours.

in a structured series of Blackball Pool events at a sensible fee. There are four ranking events and a concluding Grand Final, meaning there will be plenty of playing opportunities for your entry.

Last summer we proved what we can achieve with the successful staging of the North Devon Blackball Masters, now we want to create the hunger for all levels of player in the region by creating opportunities like these in local venues."

​​The North Devon Blackball Tour has a Facebook group hereif you wish to enter, or would like to keep up to date with all the latest news and results.

Image above is courtesy of George Totorean and Beard Productions 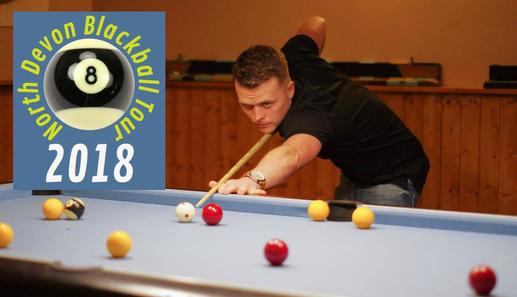