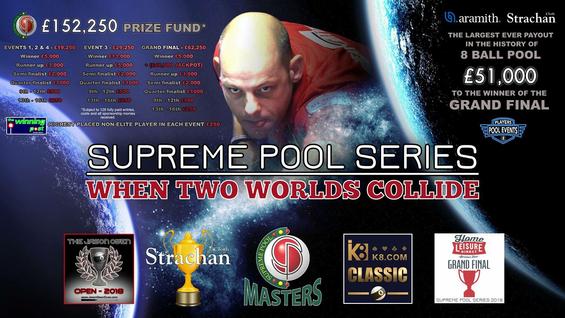 2018 SUPREME POOL SERIES - THE WAIT IS NEARLY OVER!

The long wait for the eagerly anticipated Supreme Pool Series is nearly over with action from the season opening Jason Owen Open starting on Friday morning.

This ground-breaking five event series brings together players from the top echelons of both sides of the English 8 Ball rules divide, who have been apart on the big stage for too long. As the headline strap for the series proudly declares, this will be 'When Two Worlds Collide'.

​Along with a new dawn for the sport also comes a record prize fund in excess of £150,000. A mouth-watering £51,000 will be awarded to the winner of December's Home Leisure Direct Grand Finals which eclipses the highest single winning amount ever presented in English 8 Ball tournament history.

Monetary terms aside, the confirmed line up for the year is an embarrasment of riches itself with a portfolio of global Cuesports superstars signing up.

Of the present, the Supreme Pool Series can boast both Marc Farnsworth and Tom Cousins, who finished 2017 as the Number 1 ranked players from the IPA and UK Tours respectively. Both feature at the top of the pre-tournament odds alongside the evergreen Phil Harrison, who was the 2009 WEPF World Champion.​

With so much prestigdge and euphoria surrounding the Series, the temptation was too big for several American Pool stars who will be returning to their smaller table roots.

Major competition winners, Internationals and big names from the money match scene are aplenty too, whilst there will be a cosmopolitan feel to proceedings with entries from the Republic of Ireland, France, Malta and Morocco joining the UK cueists.

Each leg of the Series will begin with 128 players in a Double Elimination qualifying format. They will be trying to advance into the straight Knock-Out Quarter-Finals which will consist of four undefeated players and four emerging from the Losers Side. The Series is a mix of both Blackball and World Rules, although a specially designed 'Supreme Rules' set will be in effect for the Grand Finals.

The Jason Owen Open will run from the 4th-6th May and you can catch all the coverage courtesy of Beard Productions, who will be live streaming four tables simultaneously. They will be broadcasting live from YouTube and the official Players Pool Events Facebook page.

A link to the draw can be found on Cuescore below -  https://cuescore.com/tournament/Supreme+Pool+Series+"The+Jason+Owen+Open"/1738775