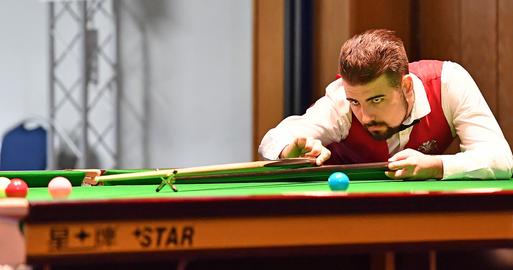 32 players are left in the chase for the inaugural World Snooker Federation Championship title and a golden ticket to the £10 million plus professional circuit next season.

After over 3 days of Round Robin action at the Dolmen Hotel in Malta, which saw the top three players from each group progress, the Knock-Out phase began on Wednesday with the Last 54 being completed - a sort of preliminary round before the Last 32.

In what was a mark of prosperity for the Women's game, Reanne Evans qualified for the Knock-Outs, although her dream was ended when she lost 4-2 to Kishan Hirani (Wales).

Eslewhere in the Last 54 stage, recent main tour professional Fraser Patrick (Scotland) kept up his hopes of a top tier return with a 4-0 win, whilst Australian Steve Mifsud - a professional at various times of his career, chalked up a 4-1 success.

Jamie Clarke (pictured above) has been agonisingly close to a main tour ticket on a number of occasions in the past. This could be the avenue to his ambition; he overcame Singapore's Ang Boon Chin 4-1 in the evening session.

Fellow Welshman Darren Morgan - Runner-up in the Seniors event here a few days ago, is also actively seeking this championship too. A 4-1 win against Israel's Tom Limor put him through. Morgan actually faces Clarke up next.

The host nation is still in with a shout of a home winner, Duncan Bezzina, Brian Cini, Chris Peplow and Clayton Castaldi all navigated Last 54 ties too.

Among the top seeds who automatically qualified for the Last 32 included Adam Stefanow, Kevin Hanssens, David Lilley and Ross Vallance, who each advanced without losing a frame. Igor Figueiredo, who was crowned the first WSF Seniors Champion here a few days ago, dropped just one frame on route. Figueiredo also has the highest break so far with an effort of 131.

The Last 32 and 16 will both be completed on Thursday.

Image above is courtesy of Andy Chubb / World Snooker Federation