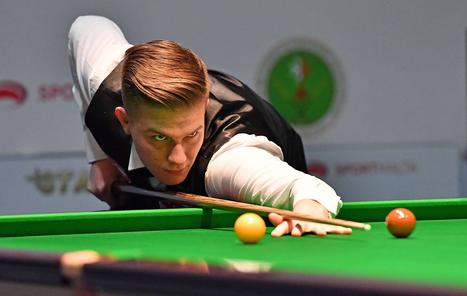 8 players are a trio of wins away from the inaugural World Snooker Federation Championship.

Thursday's action at the Dolmen Hotel in Malta saw both the Last 32 and 16 completed. Number 1 seed Adam Stefanów (Poland) didn't drop a single frame in Round Robin qualifying and during the Knock-Out stages so far he has also been very impressive.

​The 24-year-old defeated Fraser Patrick (Scotland) 4-1 and then ended the hopes of the last remaining Maltese home player, Duncan Bezzina, by the same scoreline.

In the Quarter-Finals Stefanów will face Brazilian Igor Figueiredo after he recorded victories over Saif Al Shamsi (UAE) 4-0 and Michael Judge (Republic of Ireland) 4-2. The South American ex-professional is still on course for a very special double having claimed the WSF World Seniors Championship here last week.

​Continuing the diverse theme is Iceland's Kristján Helgason - a qualifier for the Crucible in 2000, who is also in the Last 8. After losing just one frame in his Group, Helgason has followed it up with consecutive 4-0s against Andres Petrov (Estonia) and Marcin Nitschke (Poland).

Kishan Hirani (Wales) completes the top half of the draw having come through a deciding frame to eliminate Lim Chun Kiat (Singapore).

​In the bottom half, the second of three Welshmen still in is Alex Taubman, who ousted the final Englishman in the event, Kuldesh Johal, 4-3.

Taubman faces another Polish cueist who features; Kacper Filipaik. Still just 22-years-old, Filipiak played on the professional circuit for one season in 2011/2012 courtesy of his European Under 21 win in 2011. Filipiak's ambition of returning to the top tier is still active - a brace of 4-0 clean sweeps on Thursday sees him have an identical frame loss record to that of Figueiredo's.

Quarter-Final 4 is between China's Luo Honghao and Jamie Clarke, who completes the hat-trick for Wales.

Teenager Luo is a serious talent who has already constructed a maximum 147 break during competitive play. He too has been very comfortable in the KOs with back-to-back 4-0 successes over Chris Peplow (Malta) and Thomas Dowling (Republic of Ireland).

​Clarke, only 23 himself, has been so close to realising his professional dreams on several occasions in the past. He kept his nerve to edge by Number 2 seed Kevin Hanssens (Belgium) in the seventh frame.

The Quarter-Finals and Semi-Finals will be contested on Friday. There will be particular pressure in those Last 8 ties, as the final four all secure a ticket to next month's World Professional Championship Qualifiers in Sheffield.