The former world champion had previously reached the latter stages of events on the series with semi and quarter-final finishes in his last three outings, but this was his time to shine amidst the familiar surroundings of the Players Pool and Snooker Lounge in Newcastle-under-Lyme.

Joined by fellow world class cueists from the UK, Europe and beyond, Davis remained undefeated throughout the three days on his way to a cool £5,000 payday. He began his campaign by getting the better of John Roe - the player who succeeded him as WEPF World Champion in 2012 - 11-9.

Davis then registered another impressive result seeing off recent world finalist Dom Cooney, 11-5, before securing qualification to Sunday's knockout phase with an 11-7 victory over the legendary Ronan McCarthy. The experienced Brian Halcrow - who eliminated McCarthy in the losers' qualification round - was disposed of next by Davis in the last 16 (11-4).

​Coming to the tournament as this season's number one ranked player, Northern Irish youngster Declan Brennan was on yet another fine run in Staffordshire. But despite holding a 6-3 lead, the Liberty Games Open champion saw his double dream dashed by Davis, 11-8, in the quarter-finals. An integral part of last month's world team championship winning EPA England team, Shane Thompson continues to improve and cash on the series. Having eliminated Jamie Burnett, Mark Boyle and Tom Cousins in consecutive matches Thompson was finally stopped by Davis in the semi-finals, 11-6. ​

The multi-talented Boyes, who regularly switches between his cue and the commentary microphone, came through the qualifying section without losing, culminating in a defeat of Jimmy Croxton; his opponent in the Supreme Masters final some eight weeks previously.

In a twist of fate, Boyes drew Croxton again in the last 16 and completed a hat-trick of wins over him via a deciding frame 11-10 outcome. 'Box-Office' then ended the ambitions of Jon McAllister and Clint I'Anson in the last eight and four respectively to follow in the footsteps of Liam Dunster and Phil Harrison by reaching back-to-back SPS event finals.

Boyes began the final well, opening up an early 3-0 advantage, although native Davis responded with a trio of frames to square proceedings up. The pendulum swung back in Boyes' favour when he took a 5-3 lead, but Davis was to assume control during the middle of the match.

​Chalking up six of the next seven frames, Davis held a 9-6 advantage in the race to eleven. Boyes managed to keep his hopes alive but a break and finish in the nineteenth frame saw Davis emerge as an 11-8 victor, to the pleasure of the majority in attendance. He becomes the third different winner on this year's series in as many events, and the sixth overall different player to have lifted a Supreme Pool Series trophy since its creation.

Elsewhere, two-time SPS event champion and pre-tournament favourite Phil Harrison lost in the last 16 to Liam White via a deciding frame. Malta's Lydon Debono was the best performing overseas player as he qualified for the knockouts; going out to Brennan, 11-9, in the last 16.

Event 4 of the 2019 Supreme Pool Series - the Central Vehicle Leasing Challenge - will take place between the 20th to 22nd September. For further information on the series, please visit the official website here. 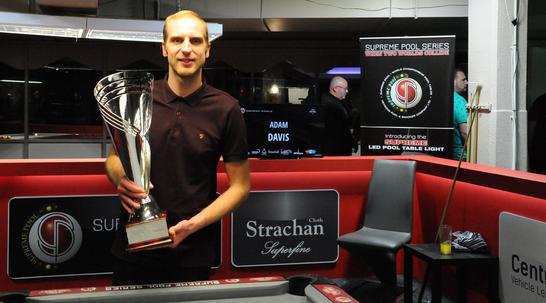