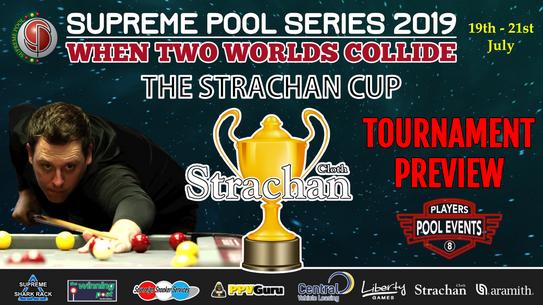 Following the emergence of maiden winners from the opening two events on the 2019 Supreme Pool Series, is another new champion waiting in the wings at this weekend's Strachan Cup, or will last year's status quo be restored?

Representing the halfway point of this year's lucrative series, event three will once again feature a plethora of English 8-Ball Pool star names. Competitors from across the UK will be joined by European, African and even Australian cueists who are all preparing for a three-day charge at the £5,000 first prize and one of the sport's most prestigious honours.​

Defending champion and pre-tournament favourite Phil Harrison - fresh from winning the World Masters in Blackpool a few weeks ago - will begin his title defence against Mark Astbury in the opening session on Friday afternoon.

Harrison remains in a race with fellow two-time event winner Scott Gillespie to secure a hat-trick of Supreme Pool Series trophies, first. Reigning BI World Champion Gillespie has to navigate a tough opening assignment when he faces the experienced and dangerous Brian Halcrow in round one.

Despite retaining the IPA Champions Cup a few months ago, last year's Strachan Cup runner-up Liam Dunster has endured a slow start to this year's SPS campaign. Winner of the record-breaking Grand Finals at the end of last year, 2018 number one ranked player Dunster will feature in a standout first round tie against recent Supreme Masters finalist Jimmy Croxton.

​Karl Boyes - conqueror at the aforementioned Supreme Masters - will momentarily put down the commentary microphone and return to his natural habitat of the baize this weekend. 'Box Office' is involved in a tasty looking match-up with Malta's Johann Attard; one of several overseas hopefuls making the trip to the Players Pool and Snooker Lounge.

Currently top of the 2019 rankings is hot property Declan Brennan, who overcame Harrison in the final to claim the season-opening Liberty Games Open in April. Off the back of a huge money match victory, the Northern Irishman will be fancied by many to go deep again. However, in testament to the Supreme Pool Series' top quality and seriously competitive nature, Brennan could instantly be pushed to the losers' side by Steve Petty in yet another blockbusting affair.

It has perhaps been surprising not to see former back-to-back WEPF World Champion Tom Cousins appear in an event final yet, but could this weekend be the Welshman's time? Cousins plays former Shanghai Masters finalist Jamie Burnett, once ranked number 27 in the world snooker rankings.

​As per previous events, the opening two days of the competition will be dedicated to double elimination qualifying as entries are whittled down to just 16 for Sunday's gripping knockout phase.