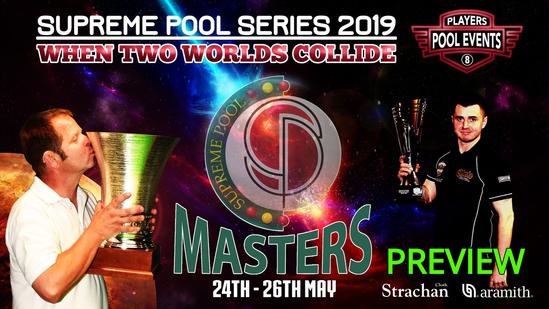 ​​Defending champion Phil Harrison’s blockbuster clash with Tom Cousins is the standout tie from the opening rounds of this weekend’s Supreme Masters; event two of the 2019 Supreme Pool Series.

Last season’s number one ranked player and Supreme Pool Series Grand Finals winner Liam Dunster travels to the Players Pool and Snooker Lounge in fine form having retained the recent IPA Champions Cup. Dunster’s first assignment will be against Jon McAllister in a repeat of the 2016 World Blackball Championship final that Dunster won.

There’ll be no shortage of high quality around the Players Pool and Snooker Lounge venue this weekend, but no-one is running better than Scott Gillespie, who has enjoyed an extraordinary twelve months in the pool world. IPA Irish Open, World Blackball and only a few weeks ago crowned the European Blackball Champion too, ‘Goobsy’ claimed two of the five Supreme Pool Series titles on offer throughout 2018. In what could be a fizzer of a match, Gillespie is first up versus Oly Bale - who himself is a former continental champion.

Harrison, Dunster and Gillespie had been the Supreme Pool Series’ holy trinity of title winners, but Northern Ireland's Declan Brennan broke up that monopoly when he was victorious at the Liberty Games Open in April.

If fans weren’t already aware of his talent and promising potential, youngster Brennan launched himself into the big time with an eye-catching 11-5 final success over Harrison at the event to lift the trophy. Now established as one of the sport’s hottest properties, he will be aiming to emulate Harrison by securing back-to-back SPS titles at the Supreme Masters. His quest begins in a match with Jamie Mantle during the 16.30 opening session.

Over 64 players from across the UK, Europe and beyond will contest the second of this year’s five event series, with their eyes on a top prize of £5,000. Played to the distinguished Supreme Rules, the tournament initially features a double elimination system with sixteen eventually qualifying for the knockouts.

One of the Supreme Pool Series’ biggest appeals is its international reach. Jake McCartney will once again travel and fly the flag for Australia, but this school is tough, and it doesn’t get much tougher than multiple-time major winner Mark Boyle in the first round.