Wallace is a former professional of 15 seasons, and in 2001 reached the Quarter-Finals of the World Championship at the Crucible Theatre.

The initial rounds were played at an earlier date, the 46 year old dropping just one frame on route to the 'Finals Weekend'. There he ousted Alistair Wilson 5-4 and Dareen Dornan 6-3 in the Last 8 and Last 4 respectively. His final meeting with Brown was a repeat of the 2015 decider.

The final would essentially be a tale of two different halves.

However, on the resumption, the Dungannon cueist turned on the class with efforts of 78, 94 and 69 to take the front at 8-7.

Brown equalised for 8-8, but Wallace responded to the pressure, finishing in style with breaks of 89 and 107.

​Patrick already held the record for NI wins. This was the fifth year in succession he took the trophy.

TJ Dowling made it a hat-trick of national titles after beating Johnny Williams 7-3 in the final this past weekend in Carlow.

16 qualifiers had previously battled it through to be part of the Republic of Ireland Billiards and Snooker Association's (RIBSA) Finals Weekend, where they would be contesting for the most prestigious title in the country.

​Williams reached his maiden major final by seeing off John O'Sullivan 4-2, squeezing past former pro Rodney Goggins 5-4, and then newly crowned European Under 21's champion (and soon to be professional) Josh Boileau 6-2.

The entertaining final was a tight affair at times, but TJ broke free from 3 all by chalking up the last four frames.

For further information, and the full results, please visit the RIBSA website here.

The tournament was played in a number of stages over the last two months. In the latter rounds, Totten was superb with 4-0 wins in the Last 32 and 16, then by beating Paul Hardy 5-1 and Michael Collumb 6-3 (breaks of 64, 52) in the Quarter and Semi-Finals respectively.

The teenager, who will be taking part at Q-School this week, crafted efforts of 68 and 50 in the final.

The final of this year's edition will feature the reigning champion Darren Morgan and 2013 winner David John, after both won their respective semi-final matches 6-2 against Andrew Pagett and Alex Taubman.

The championship decider is likely to be played this month, with the exact date released over the next few days.

To read about both finalist's path to this stage, please visit the Welsh Snooker website here.

Would you like one of your national championship events to feature on 'The Cue View'? If so, please get in touch with us via our Facebook / Twitter pages, or email michaelday@thecueview.com. 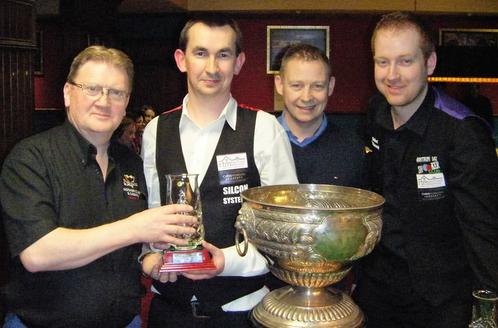