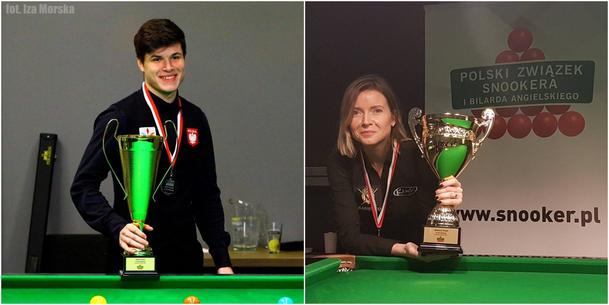 BARANOWSKI AND LACKA ARE 2018 PREMIER POLES

Baranowski defended the Men's Championship after a 6-4 victory over former professional Kacper Filipiak, in what was a repeat of last year's final.

​Filipiak - winner of the European Under 21 Championship in 2011, started the final strongly with breaks of 112 and 52 to take a 2-0 advantage. However, Baranowski claimed 4 of the next 5 to move ahead, and although his opponent squared it at 4-4, he crafted efforts of 98 and 68 to retain the top title in Polish amateur snooker.

Mateusz's path to the title was not straightforward, though. He qualified second from his group behind the undefeated Michał Zieliński, who he lost to 4-3. Zieliński, winner in 2009, 10 and 13, would go on to be the Bronze Medal winner.

​In the Knock-Outs the eventual champion was superb when eliminating Maciej Kusak 4-0 in the Last 16; racking up breaks of 64, 57, 67 and 93. In the Quarters he also didn't drop a frame when defeating Marcin Nitschke 5-0, but it was his Semi-Final meeting with Grzegorz Biernadski where he came close to an exit. He won the last two frames in a 5-4 victory which saw him seal progression on the final pink ball in the decider.

20-year-old Baranowski will be one of six Polish players scheduled to be at the EBSA European Men's Championship in Bulgaria next week. He will also be in the Under 21 category, where he looks likely to launch a strong bid.

Elsewhere during the event in Warsaw, Adam Stefanow - who played in a number of professional competitions last season as a Q-School Top-Up, lost in the Last 16 to Karol Lelek, 4-2.

The highest break across the four days was a 129 by Daniel Holoyda, who didn't get out of his group.

The pictures above are courtesy of Iza Morska.

I'd like to thank Iza Morska for all her help, information and time in putting this article together!

Written and published by Michael Day on the 1st February 2018