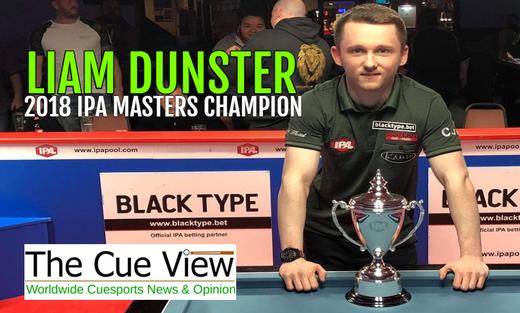 Liam Dunster was a master of brinkmanship on his way to claiming the inaugural IPA Masters title last weekend at the Savanna Pool and Snooker Club in Manchester.

​In what was the IPA's last major event of the year, both professional and amateur hopefuls competed in this new addition to the circuit that was shown live throughout on FreeSports TV. Featuring a double elimination qualifying format, most started their campaigns on Friday afternoon/evening, attempting to secure a berth in the knock-out quarter-finals.

Dunster comfortably dispatched Ben Rowland (10-1) and recent Premier League Semi-Finalist Jimmy Carney (10-4). He then secured his passage into the Last 8 with a 10-5 victory against current IPA World Champion Ben Davies.

In the knock-outs Dunster exhibited further elements of his impressive playing palette - doggedness, determination and nerve.

Facing in-form fellow Scot Mark Boyle - winner of the British Open and Premier League within the last month, he recovered from 9-6 down by taking the last four frames for a 10-9 success.

In the Semi-Finals he clashed with another recent tournament winner in Jordan Shepherd. Two of the hottest properties in the blackball world right now, and with contrasting styles, this looked likely to entertain and be close. For sure, it went to the wire, where Dunster showed grit and passion during and after the decider.

Dunster faced 2016 IPA World Champion Gareth Hibbott in the final, who had also remained undefeated through the weekend. In a quality display that featured multiple dishes, 'The Duster' cleaned up with an 11-8 win.

It was Dunster's second major TV title of the year following victory at the Champions Cup during the summer.

Elsewhere in the tournament, two-time back-to-back WEPF World Champion Tom Cousins made his eagerly anticipated IPA debut, although it didn't go according to plan.

The Welshman was ousted 10-9 by Andrew McKie in the opening round, and whilst he got the better of Ross Fernie (7-6) in the Losers' Side, Boyle eliminated him (7-3) afterwards.

2016 WEPF World Champion Shaun Chipperfield was another high-profile cueist making the switch in this tournament. He navigated his first three matches, which included a 10-9 win over Craig Marsh on the TV table, but Chipperfield missed out on qualification after losing to Simon Ward (10-8) and then Jon McAllister (7-2).

The picture above is courtesy of the IPA