David Grace claimed his second Challenge Tour title of the campaign and moved to the top of the rankings list after victory in Lommel on Friday evening.

39 players from the UK, Europe and beyond took part in the sixth installment of the series which was being played in the same city as the ongoing professional European Masters.

Former UK Semi-Finalist Grace emerged from a stacked bottom half of the draw which featured the top 5 players in the rankings (at the start of the competition). Having received a bye into the Last 32, the Yorkshire cueist began his tournament with a 3-2 success against Christopher Keogan.

Returning for the conclusion of the event on Friday, Grace appeared to step it up a gear. Eliminations of Joshua Thomond (3-0), John Foster (3-1) and then Daniel Womersley (3-0) saw him into his second final of the season; he had previously tasted glory in Event 2 at Preston during July.

His opponent in the final was fellow Englishman Ben Hancorn, who had seen off Jamie O'Neill, Brian Ochoiski, Steven Hallworth and then Peter Devlin in the Last 4. Grace ended Hancorn's hopes, though, with a 3-0 win in the title decider.

After five different champions from the opening five Challenge Tour events, Grace is the first to win multiple trophies on the tour. The £2,000 he earns here pushes him to the top of the rankings pile with £5,525. After the ten events have been completed, the top two will secure professional tour cards for at least the following two seasons.

There is a margin between the top three and the chasing pack with Barry Pinches (£2,750) in fourth and Steven Hallworth (£2,400) in fifth.

Event 5 winner David Lilley lost in the preliminary round to John Foster, 3-1. Lilley stays on £2,200 and is now in sixth.

Challenge Tour Event 7 sees a return to the Barnsley Metrodome next weekend.

(from the Quarter-Finals onwards)

​(the full results can be viewed via snooker.org here) 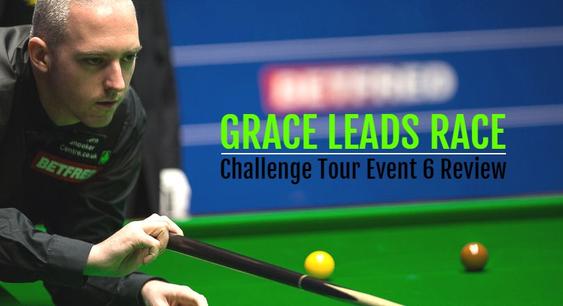