Simon Bedford became the seventh different winner on this season's Challenge Tour after he was the last man standing at Event 8 last weekend.

Played at the Terminal Snooker Club in Budapest, it was the first time that Hungary had held a World Snooker event. 41 players from the UK and across Europe traveled to the capital city, but it was the experienced 42-year-old former Crucible qualifier Bedford who prevailed.

His opponent there was Event 5 winner David Lilley, who has featured heavily on the professional circuit in recent months as a Q-School top-up player. However, it was Bedford taking home the trophy and £2,000 following a 3-1 success.

Having only been a part-timer on the Challenge Tour this campaign, Bedford's bounty pushes him up into seventh on the rankings list with £2,450, but he is still £3,325 off the top two promotion positions.

After all ten events have been completed, first and second on the list will secure guaranteed two-year professional tour cards. Events 2 & 6 winner David Grace went into the weekend as the leader, but after a second round loss to Christopher Keogan (3-2), Brandon Sargeant was able to climb the summit again via his quarter-final finish.

​Sargeant, victorious at the opening event in June, sits on top with £5,925, only £150 ahead of second placed Grace.

Mitchell Mann began the latest leg in third, and that's where he stays after his last 16 effort. Mann has lost a little bit of ground, but is still just £250 away from Grace.

It appears very likely that two from the current top three of Sargeant, Grace and Mann will qualify. However, mathematically, the chasing pack could claw the deficit back, although it would take an exceptionally strong finish to do so.

To view all the results from Budapest, and the entire Challenge Tour Rankings List, please visit snooker.org here.

The picture above is courtesy of World Snooker. It is Bedford being presented the trophy by Peter Varga, Chairman of the Hungarian Snooker Association.

Article written and published by Michael Day on the 27th November ​​ 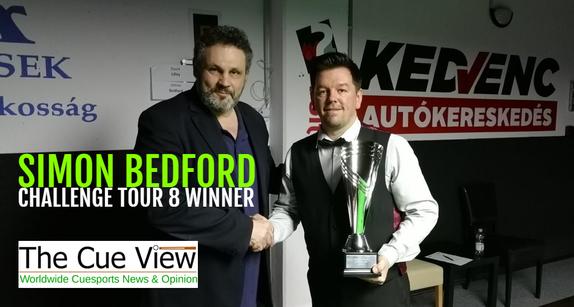