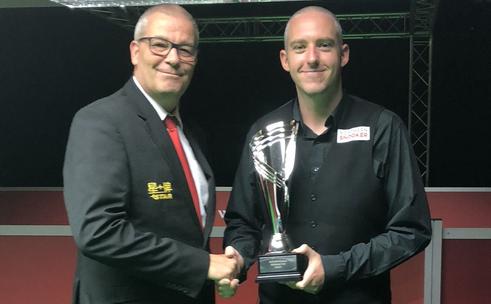 After stops in Burton and then Preston, this season's Challenge Tour makes its debut appearance outside of the UK in Latvia on Saturday where it will be played alongside the professional Riga Masters tournament. Despite opening the event up to players outside of the 64 who qualified for it via Q-School, there are just 25 entries, a frustrating amount.

Event 1 and 2 winners respectively, Brandon Sargeant and David Grace are the joint-leaders of the Order of Merit and would be in line for the two pro-tour cards on offer. However, including this weekend's competition, there are still 8 events remaining.

Both have made the journey to the Baltic region; Sargeant faces Callum Lloyd first up, while Grace is one of seven players to have received a bye into the Last 16 where he plays either Jamie Curtis-Barrett or Andreas Ploner.

Third placed Mitchell Mann meets James McArdle and fourth placed Luke Simmonds will cross cues with either John Foster or sixth placed Steven Hallworth. Simmonds has two bites of the cherry during his trip as he is also in the Riga Masters after qualifying as a top-up player; Kyren Wilson is his opponent there.

Although this latest leg is only just over one-third full (the original blueprint was for 72 players at each event) the prize money has stayed the same with the champion banking £2,000. All the players are already on money.

​Picture above is courtesy of World Snooker