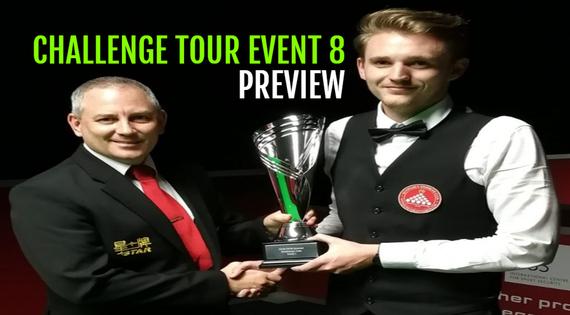 It's getting to the business end of this season's Challenge Tour with just three more legs remaining. Action returns to the continent this weekend with Event 8 taking place at the Terminal Snooker Club in Budapest, Hungary.

Unfortunately, as we have seen with previous stops on the tour (especially 'overseas' ones), only 44 of a possible 72 places have been filled, although all of the top 9 from the current CT Rankings List are scheduled to make the journey.

Just £325 separates leaders David Grace (£5,650), Brandon Sargeant (£5,425) and Mitchell Mann (£5,325). After all ten tournaments have been completed, the top two from this list will secure guaranteed two-year professional tour cards, so pressure for this trio, and the chasing pack, will be increasing.

​Both Grace and Sargeant have to play in the preliminary round against tricky opposition in Peter Devlin and Dylan Emery, respectively. Mann has received a bye into the Last 32 where he will meet Joshua Thomond.

Fourth-placed Barry Pinches (£3,450) has a gap to make up on the promotion berths, but with £2,000 going to the winner of each event, victory in Central Europe would dramatically change the complexion of the standings. Pinches faces Jamie Curtis-Barrett in a prelim.

Joel Walker's (£2,950) success at Event 7 in Barnsley last month launched him up to fifth in the rankings and in contention. Walker will cross cues with Latvian youngster Rodion Judin before the second round.

Sixth-placed David Lilley (£2,700) has frequently featured in professional events this campaign as a Q-School top-up player. The three-time English Amateur Champion is still in the promotion picture, and has been spared the preliminary round with a match against Ukraine's Sergey Isaenko in the Last 32 first on his agenda.

The final two Challenge Tour competitions are due to take place in January and March.