This season's Challenge Tour is really heating up with the penultimate leg of the ten event series taking place this weekend at the Star Snooker Academy in Sheffield.

Throughout the year an accumulative order of merit has been determined by prize money won in each event - similar to how the professional rankings work. At the end of the campaign the top two players will each earn main tour cards for the 2019/20 and 2020/21 seasons.

For most of the year Brandon Sargeant (£5,925), David Grace (£5,775) and Mitchell Mann (£5,525) have featured at the head of the rankings, and it looks very likely that two of these three will gain promotion.

However, the trio face tough opening round assignments on Saturday in Sheffield.

Event 1 winner Sargeant (pictured above), who unlike Grace and Mann has yet to taste life as a professional, will play promising teenager Ryan Davies in round one. Davies is the current English Under 18 champion and has recently received a wildcard into next month's Snooker Shootout.

​A multiple winner on the circuit at events 2 and 6, Grace will cross cues with fellow ex-professional Steven Hallworth, who has a feint hope sitting in sixth position with £3,025.

There is another quality affair on the cards with Mann (event 4 champion) playing fifth-placed Barry Pinches (£3,575, event 3 champion). Should both Mann and Sargeant win their first two matches, the pair would clash in the last 16.

David Lilley has had a very busy season on several tours; one of his highlights was claiming Challenge Tour event 5 in Derby last September. Despite having missed three events, the three-time English Amateur champion sits fourth on the OOM with £3,700. He has drawn Jake Nicholson in round one.

Lilley does however have a more likely avenue to the main tour courtesy of his results as a Q-School top-up player this term. He has impressively amassed £22,500 during professional events as an amateur and is currently third on the one-year list of players who have not already qualified for a tour card for 2019/20. The top eight here will also get their tickets stamped.

​56 players have entered this latest leg and there is a cosmopolitan palette on display with 11 different nations represented; England, Wales, Republic of Ireland, Belgium, Germany, Austria, Latvia, Hungary, Ukraine, Hong Kong and Australia.

There is also female representation with Ng On Yee, Reanne Evans and Heather Clare all in the draw.

The picture above is courtesy of World Snooker. 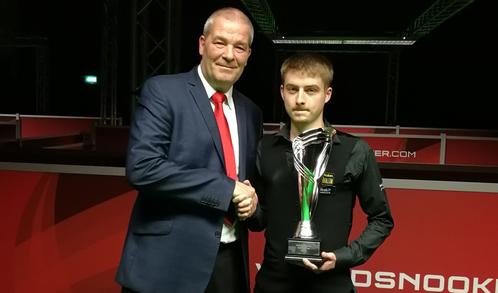