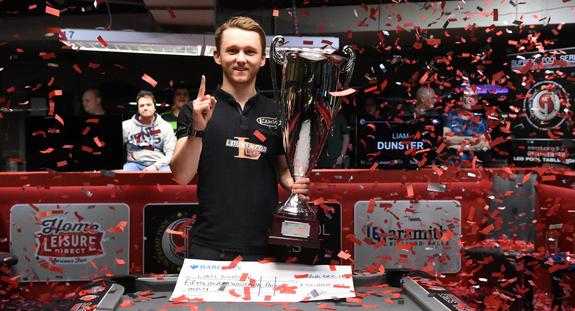 Liam Dunster put the disappointments of two previous Supreme Pool Series final defeats behind him as he claimed the season concluding Home Leisure Direct Grand Final title last weekend. In the process, he took home a record-breaking cheque for £51,000 - the largest tournament prize ever awarded in English 8-Ball Pool.

After a quartet of events throughout the year, 124 players were eligible for the highly anticipated final chapter of this inaugural SPS. During the three days at the Players Pool and Snooker Lounge, Dunster went undefeated; matching Scott Gillespie's feat at September's K8.com Classic as the only two players on the circuit to have lifted a trophy without a loss.

Coming into the tournament as the third seed, Scotland's Dunster received a bye before defeating David McNamara (11-7), Toby Bolt (11-6) and Karl O'Donoghue (11-5) to qualify for the Last 16 single elimination phase.

​On Finals Day he eliminated Northern Irish legend Ronan McCarthy 11-8 and followed it up by getting the better of IPA professional number 1 Marc Farnsworth, 11-5 in Last 8.

The Semi-Finals threw up a box office clash with fellow in-form countryman Gillespie. Winner of the Jason Owen Open and the before mentioned K8.com Classic earlier in this campaign, Gillespie had recently succeeded Dunster as the reigning B.I. World Champion.

​Gillespie's hat-trick attempt was going according to plan as he controlled the first half of the match - holding a 6-2 lead at one stage. However, a crucial miss when he looked like going 8-6 up appeared to be a catalyst for Dunster, as he chalked up five in a row to win 11-7, thus gaining some measure of revenge for his loss in the JOO final back in May.

Return of The Apple

Liam's opponent in the final was a resurgent Darren Appleton.

​A BCA Hall of Fame inductee, Appleton was one of several stars from the previous decade and beyond who returned to their smaller table roots after being tempted by the prestige and riches of this innovative series.

Despite having been away from the sport for so long - around ten years, in fact, the 2012 World 9-Ball Champion showed he can still mix it with the current crop of hardened match-players.

'Dynamite' did it the hard way, though. Defeating Darren McVicar (11-7) first up, he was then pushed to the Losers' Side after a bitter 11-10 loss to Farnsworth - an encounter that saw him miss match ball black in the decider.​ To his credit, Appleton re-grouped. Culminating with a victory against former Mosconi Cup winning teammate Chris Melling, he won five straight matches to haul himself into the Last 16.

His reward was a romantic showdown with number 1 seed Phil Harrison, the other two-time winner on the Supreme Pool Series with the Strachan Cup and Supreme Masters titles already in his pocket. But just like Gillespie, Harrison's bid for an unprecedented trio of trophies was denied when Appleton came through in a deciding frame.

Appleton held his nerve again when ousting Karl Boyes (another colleague he shared Mosconi Cup glory with) by the same scoreline in the Quarter-Finals, and then advanced to the championship climax with an 11-8 win over local star and former WEPF World Champion Adam Davis.

In many ways, the final showcased all that's good with the Supreme Pool Series. It was a clash that encompassed different eras, generations and styles, between two players who have played opposite rules sets for the majority of their careers.

After losing the opener, Appleton went 4-1 up, although Dunster responded to draw level at 4-4. The Englishman re-asserted his lead with the next two, but his opponent halved the deficit by taking Frame 11.

Then came a crucial moment towards the end of Frame 12, which appeared to change the course of the tie. Clearing up to restore a two-frame cushion, Appleton missed a routine black into the left middle pocket. There was talk of a kick, but regardless, Dunster gleefully took the unexpected gift to square it up at 6-6.

​Perhaps spurred on by his final defeats here to Gillespie and Harrsion, Dunster, who admitted he has improved his fitness with trips to the gym since, was strong in the latter stages. Aided by another pivotal, unexplained missed black into the same middle pocket by his rival in Frame 16, Dunster came through an 11-9 victor to claim the most lucrative tournament prize in the sport's history.

One of the hottest properties in English 8 Ball Pool right now, it capped an amazing year for the talented 25-year-old who also lifted trophies on the IPA circuit via the Champions Cup and Masters. Dunster also finishes the year as the Supreme Pool Series number 1 ranked player.

A series that has brought together some of the best from both rules sets - past and present, the final sixteen in the Home Leisure Direct Grand Final featured no less than nine adult world champions from various disciplines.

Pre-tournament favourite and current five-time WEPF World Champion Mick Hill worked hard getting back on track after an opening match loss to Chris Day, but his hopes were dashed by the impressive Craig Waddingham (11-9) in the Last 16.

​It exemplifies how tough the Supreme Pool Series is when Hill - one of the sport's greatest ever exponents, reached one final in four attempts.

Players representing the UK, Ireland, mainland/continental Europe, Africa, Asia and even Australia have participated. Fans have also witnessed dream inter-promotional match-ups that they have often missed out on in recent years.

During the final, whilst commentating on the live stream, tournament organiser Lee Kendall declared that the series will be making a return in 2019. Watch this space.​

Results (from the Last 16 onwards) - undefeated players on the left