Dunster, the current B.I. World Champion from Scotland, patiently waited until Week 15 of the competition to get his campaign underway in Greenock where he defeated Marc Fleming (6-3) before eliminating one of the hot pre-tournament favourites in Mark Boyle (6-4).

​He returned to action three weeks later in Solihull for the Last 16 and Quarter-Finals stages. There he ended the hopes of Drew Hughes (6-4) and then Gavin Robinson (6-2).

Those victories saw him advance into 'Finals Night' which was held at the same Rileys Solihull venue. Dunster was joined by fellow countryman Scott Gillespie, England's Jack Whelan and Northern Ireland's Ronan McCarthy, who had all also progressed through two separate matchweeks each.

Appearing in the opening Semi-Final clash, Dunster chalked up five frames in a row to overturn a 3-1 deficit into a 6-3 success against Gillespie. This meant gaining revenge for losing to Gillespie in the final of the Jason Owen Open, Event 1 of the Supreme Pool Series a couple of months ago.

In the other Last 4 meeting, McCarthy, who has won the IPA British Open and Welsh Professional titles within the last 12 months, secured a final berth courtesy of a 6-3 win against former IPA World Champion Whelan.

The final would bring together two of the Pool World's most consistent performers. After an opening frame which saw an opportunity squandered by both parties, it was McCarthy who capitalised to deposit first, and then built on that platform to amass a 3-0 lead.

Dunster opened his account in Frame 4, but a tremendous cut back black from McCarthy re-asserted his three frame profit, leaving himself just two away from yet another championship.

However, this would prove to be McCarthy's peak as his inability to find balls off the break eventually contributed to his downfall which saw Dunster once again win five successive frames for an overall 6-4 triumph.

The image above is courtesy of the International Professional Pool Players Association. 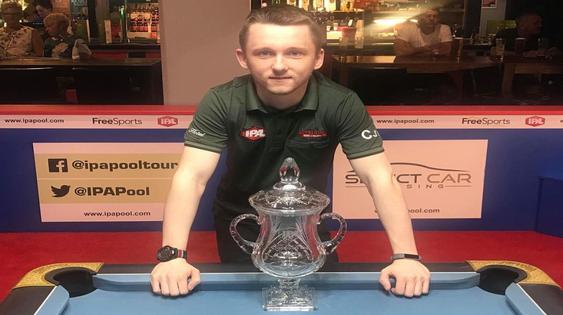