​​Jamie Clarke and Joe O'Connor will make their professional debuts next season after emerging from the EBSA Play-Offs on Wednesday at the English Institute of Sport in Sheffield.

The season-ending event featured the top 8 performing amateurs across both the Paul Hunter Classic and the Gibraltar Open earlier in the season. Played as a Knock-Out over the Best of 7 Frames, the Semi-Final winners would secure a guaranteed two-year World Snooker Tour Card for the 2018/19 and 2019/2020 campaigns.

After so many close and bitter disappointments in the past, this would have been a very sweet and proud moment for Welshman Clarke, as he finally achieves his professional ambition.

The 23-year-old defeated former Masters, UK and World Championship Semi-Finalist Andy Hicks 4-2 in the afternoon before holding his nerve to oust George Pragnall 4-3 in the evening.

Pragnall had earlier eliminated the Number 1 ranked player Jamie Cope 4-2, having been 2-0 down.

Clarke had lost in a deciding frame during the final round of the EBSA Play-Offs twice before – in 2015 he lost to Martin O'Donnell and in 2016 to Elliot Slessor, so full credit for having the mental toughness to finally cross the line. Before these he had got to the final hurdle at the 2014 Play-Offs where he was defeated by Ian Glover 4-2.

He had also missed out on top tier qualification in the past after losing in the finals of the European Amateur Championship (twice), the World Under 21 Championship (losing in a deciding frame) and the last qualifying rounds of Q-School, twice (losing via a deciding frame on one of those occasions). In total, this was the ninth opportunity to realise his dream.

22-year-old Englishman O'Connor will also play on the pro circuit for the first time after dropping just one frame across both matches.

Despite first round opponent Brandon Sargeant making a 111 break, O'Connor progressed 4-1, and then he was relatively stress-free in a 4-0 success against fellow countryman Oliver Brown. Brown had ended the hopes of former English Amateur Finalist Andy Symons, 4-1, in the first round.

Pictures above are courtesy of Andy Chubb/WPBSA and World Snooker 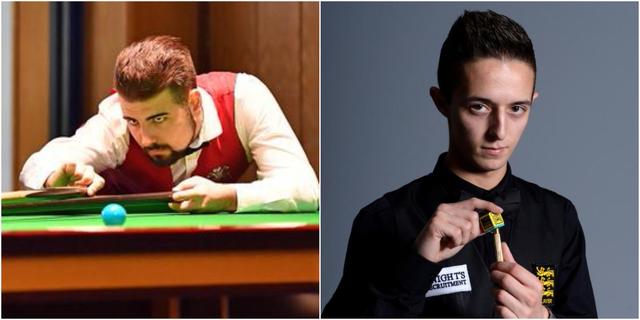