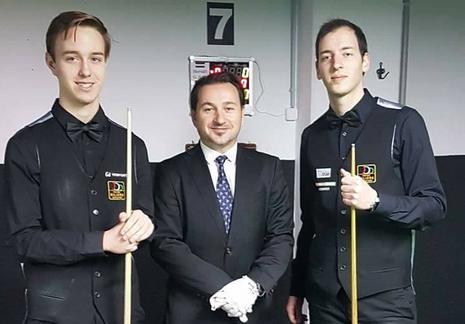 Here at The Cue View we're proud and passionate about Grassroots and Amateur Snooker. Today we're off to Hungary...

Zsolt Fenyvesi (pictured above right) is once again the best in his country after claiming the Hungarian National Snooker Championship for the sixth time. It was also his fourth in a row.

​55 players began this year's event which was held between the 2nd-10th December at the brand new Snooker Terminal Club in Budapest. The venue appears serious about top quality snooker as it is equipped with 8 STAR Tables.

After working his way through the draw Fenyvesi defeated Attila Horváth (pictured above left) 7-5 in the final, which was refereed by Péter Palásti. The pair also competed last year's final.

Third place in this championship went to Gábor Solymosi.

28 year old Fenyvesi has taken part in the last two European Amateur Championships in Poland (2016) and Cyprus (2017). Both times he qualified from his Round Robin Group

Like much of Europe, snooker seems to be gaining popularity in Hungary. The country has twice hosted big exhibition events this year. Along with Michaela Tabb, in March Ali Carter played Neil Robertson whilst in October Mark Williams and Steve Davis made the trip over there. There were very good crowds for both.

According to information I found on-line between 50,000-100,000 Hungarian fans regularly tune in to watch Snooker on Eurosport with their native commentary. The amateur circuit in the country looks affluent too with 12 tournaments in a season.

Could we soon see a professional player emerge from Hungary or a top tier event be held there?

​Picture above is courtesy of Magyar Snooker Gála.

Written and published by Michael Day on the 10th December 2017