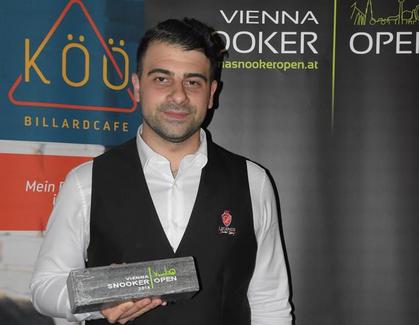 Celebrating its eighth edition, this 10,000Euros event brings together professional and amateur players from Europe and beyond. As usual, the tournament was fully subscribed with 80 entries and in total there were an impressive 20 different countries represented.

Several top tier stars made the trip once again and it was ShootOut Champion Georgiou who would claim the trophy and 2,500Euros.

The starting entry were all split into 16 groups of 5 with the group winners going staright into the Last 32 Knock-Outs, whilst those finishing second or third playing in the preliminary KO Round.

All of the professionals topped their groups without defeat, except Tom Ford, who had an eventful few matches. The World Number 32 compiled a maximum 147 break during a 2-0 victory, but in a later group fixture he lost 2-0 to Austrian Thomas Janzso which put him through in second spot. However, Ford had no issues dispatching Daniel Seyser (Austria) 2-0 in the Last 48.

​Georgiou didn't drop a frame in qualifying and then continued to be untroubled in the KOs with 3-0 wins over Bernhard Wallner (Austria) 3-0, Stephen Croft (England) 3-0 and Jimmy Robertson (England) 3-0. In the Semi-Finals his streak of frames was stopped, although he managed to get past Alexander Ursenbacher (Switzerland) 4-2 with breaks of 83 and 73 helping him out.

​Muir opened the final in ideal fashion as breaks of 59 and 77 aided him to a 3-1 advantage. However, Georgiou responded and with efforts of 109 and 60 he squared it up.

Momentum swung again as Muir moved one away from victory when chalking up Frame 7, although Georgiou forced a decider and then crafted a break of 80 to take the plaudits with a 5-4 success.

​The best performing amateur was Bulgaria's Bratislav Krastev who reached the Quarter-Finals before going out to Ursenbacher 3-1.

​The picture above is courtesy of Alex Trinkl / Vienna Snooker Open