​Despite a strong amateur presence across the last couple of days, it is an all-Professional affair for Finals Day at the 2018 Gibraltar Open.

This event was a great opportunity for the amateurs with many big name non-entries and withdrawals. Alongside the Paul Hunter Classic which was held last summer, these are the only current World Snooker tournaments that are open to all comers.

Five amateur players reached the Last 32 this weekend; Jamie Cope, Andy Hicks, Jamie Clarke, Michael Wild and Brandon Sargeant – each earned £2,000 for their efforts. Cope, Hicks and Wild have all been tour card holders in the past.

James Cahill, Matthew Day, Simon Lichtenberg, Jamie O'Neill, Oliver Brown and Tom Kevern featured in the Last 64, cashing in with £1,000 each. German youngster Lichtenberg will be on the professional tour full time next season courtesy of his European Under 21 Championship success in Bulgaria last month.

THE EBSA PLAY-OFFS
Perhaps more of an issue for some of the amateurs this week was the EBSA Play-Offs Order of Merit. This is an avenue onto the pro circuit with a guaranteed two-year pass; it has been in place for a few years now.

It is a ranking list derived from points accumulated by the amateurs at the Paul Hunter Classic and Gibraltar Open. The points system is a little bit complex, but simply put, the top 8 qualify for the Play-Offs.

The Play-Offs are played separately. In the past they have been contested at the same venue as the World Championship qualifiers, and I believe this to be the case again this season.

The octet will play a Knock-Out with the two finalists getting the coveted cards – meaning two victories in Sheffield are required. Last season Peter Lines and Gerard Greene utilised this pathway to get back on to the top tier.

THE TOP 8
According to, and with many thanks to @kindsadsa86 on Twitter, I can provisionally say who these eight players now are.

WARNING - These are my final calculations going off the information I have found from multiple sources, therefore these are UNOFFICIAL and UNCONFIRMED. These are not in any specific seeding order either, as there is a criteria to determine this that I do not fully understand with withdrawals. However, I have read if players are tied on points, their Gibraltar Open result takes preference over their PHC result. If level on both counts there, it goes to frames won in the Gibraltar Open then PHC.

​​​Two-time ranking event finalist Cope tops the OOM after Last 32 runs in both the PHC and GO.

Pragnall manages to stay in the eight, even though he didn't qualify for the pro rounds in Gibraltar. Pragnall led the OOM after the PHC because of reaching the Last 16 in Germany - the best performance of any amateur across both events.

The unlucky player to finish just outside these spaces in ninth is long time former professional Barry Pinches who ended up on 70 points after claiming 40 points in Germany and 30 points in Gibraltar. Because Pinches is on his own on 70 points, I am fairly confident of my top 8 being correct (although not necessarily in the correct order).

COULD THERE BE A TWIST?
There could, however, be a reprieve for Pinches. Both O'Connor (England) and Clarke (Wales) will be taking part in the inaugural WSF Championship later this month in Malta. Should either win the tournament, they will automatically secure a professional tour card and will therefore drop out of the Play-Offs. Presumably, Pinches will benefit from this and replace them.

THE DRAW
Again, this is unofficial, but I understand the Play-Off fixtures will be determined on seedings. Therefore 1v8, 2v7, 3v6 and 4v5.

The EBSA Play-Offs system has been implemented for a few years now and I believe was brought in and around when the European Tour / PTC Series started. However, back then, there were 6 events across Europe that amateurs could enter and accumulate points - now there are just two.

With six events, I think this system was pretty fair, however, with just two events I'm not so sure.

Luck of the draw, whether you get a bye and withdrawals have all played a part in the Order of Merit. Nothing against the players who have qualified (they have all won in the main draw rounds and it is the same for everyone) but I would maybe like to see a different system in future.

Of course, there is doubt whether the Gibraltar Open will go ahead next year as its three year contract is now up, so this could be the last time we see the EBSA Play-Offs anyway. 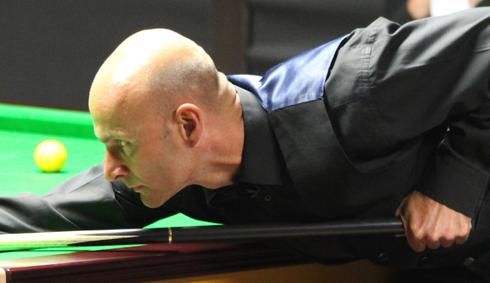