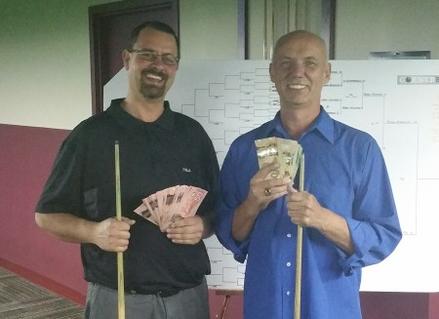 45 snooker players spent the weekend at The Corner Bank for the inaugural GTA Six Red handicap snooker tour event.  The calcutta was held Friday evening prior to the tournament draw and it netted $8,000 towards the eventual purse.  The Corner Bank added $1,000 to the entry fees brought in of $9,000, bringing the prize pot to nice event $10K.

The handicap range went from -4 for the very elite players to 28 for the players not quite so adept around the snooker table. Play started at 10am Saturday morning and as expected in handicap tournament of this nature, upsets were front and center. Play continued all day until only eight players were left standing. These eight were asked to come back Sunday at noon to contest the quarter finals on.

The final day belonged to Floyd Zeigler, the winner of the first GTA Six Red Snooker Tour at The Corner Bank. Floyd defeated Dan Bissonette in the final and pocketed $4,000 for his win. Dan picked up $2,000 for the runner up finish. Losing semi finalists were Jason Williams and Alan Whitfieldwho each won $1,000 for their finishes. Our quarter finalists ofShane Gummerson, Edward Ling, Rob Waddell and Chris Wood all took home $500 each.

​A big thank you to all the competitors and fans who came out and supported this event. And a shout out to all the staff at The Corner Bank for their efforts and hospitality.

The next event is scheduled for Monte Carlo Billiards in January. Event details will be released very soon.

thecueview would like to thank the GTA Six Red Snooker Tour for their hard work in promoting snooker in Canada. 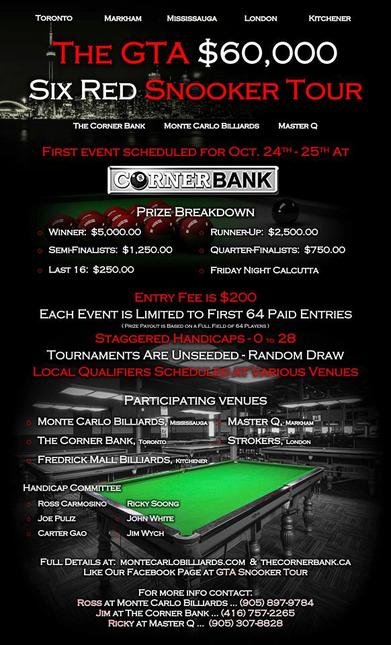