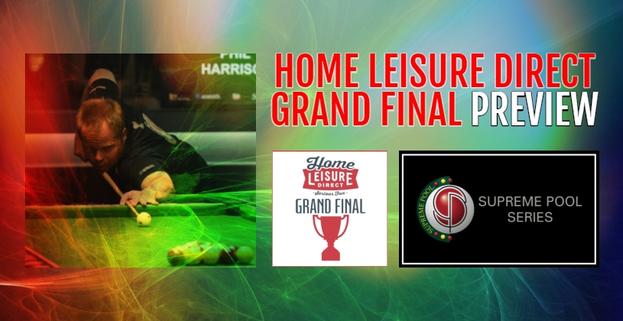 HISTORY TO BE MADE AT HOME LEISURE DIRECT GRAND FINALS

​The richest prize in the history of English 8 Ball Pool will be claimed come the conclusion of the Home Leisure Direct Grand Finals next month at the Players Pool and Snooker Lounge in Newcastle-under-Lyme.

Held between the 30th November to the 2nd December, this showcase event is the culmination of the five-leg Supreme Pool Series that has been running throughout the year. The innovative concept has brought together the world’s best players from both sides of the sport’s rules divide, thus allowing to feature dream inter-promotional clashes that the fans have been starved of in recent times.

Entrants from all four corners of the UK and Ireland have been joined by representatives from France, Malta, Morocco, India and even Australia, in what has been a truly international outreaching series in terms of viewership and participation.

With the inevitable strength in depth, it is perhaps a surprise that just two players have dominated proceedings by scooping up all four titles on the series so far.

Scott Gillespie claimed the first (Jason Owen Open) and latest (K8.com Classic) stops on the circuit, whilst the evergreen Phil Harrison tasted back-to-back successes at the Strachan Cup and Supreme Masters during the summer. Harrison’s dramatic deciding frame win against fellow all-time great Mick Hill in the Masters was arguably one of the sport’s finest ever finals.

125 players have met the qualifying criteria for the Home Leisure Direct Grand Finals, which will be played under the new, revolutionary Supreme Rules discipline. The last man standing will walk away with a life changing £51,000, a new record in English 8-Ball Pool competition history, eclipsing the £50k that was won by Frankie Sargeant during the one-frame Pub Pool Challenge at the Ricoh Arena in 2006.


The seeds and the draw
As was the case in the last two events on the series, double elimination qualifying is the order of the day until the Last 16 knockouts.

Top seeds Harrison, Gillespie and two-time finalist Liam Dunster all receive opening round byes. Five-times WEPF World Champion Hill, who is likely to be the pre-tournament favourite once

again, will face Malta’s Scott Muscat first up. Hill will be hoping to break his SPS duck at the most potent point.

For his standards, IPA World Champion Ben Davies has had a disappointing time at Players this year, but he too has the opportunity to time his run perfectly. The Welshman crosses cues with fellow professional Craig Brown, the winner will meet Gillespie in Round Two.

Coming off the back of a trio of big victories in recent weeks, the in-form Mark Boyle is another fancied competitor looking to strike. Sitting in the same mini-section as Gillespie and Davies, his first challenge to complete is Michael Smout.

2013 and 2014 WEPF World Champion Tom Cousins takes on George Tierney in what will be a keenly watched affair, whilst long time professional number 1 Marc Farnsworth would meet BCA Hall of Famer Darren Appleton in the second stage if they overcome Ben Mackie and Darren McVicar respectively.

Appleton is not the only star name from the wider world of cuesports who has returned to his smaller table roots during the Supreme Pool Series. Enticed by the prestige and record-breaking rewards on offer, Chris Melling (plays Lee Washbrook) and Karl Boyes (plays Lee Clough) are eligible and available for the Grand Finals, too. Jayson Shaw, who will be on duty with Team Europe at the Mosconi Cup, also featured earlier in the campaign.

All three days of this historic spectacle will be broadcast live via Beard Productions, who will stream four tables simultaneously from every session.

You can keep up to date with all the latest news, scores and results by visiting the official Supreme Pool Series website or their Facebook and Twitter accounts.