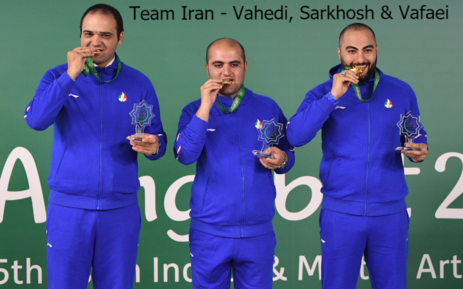 Defending champions China (although back in 2013 it was Ding, Liang & Tian) were this year represented by current top tier trio of Zhou Yuelong, Yan Bingtao and Zhao Xintong.

Team Afghanistan, made up of Salih Mohammad Mohammadi and Mohd Rais Sanzai were the other Bronze Medalists.

Bronze Medals in this discipline were awarded to George Lteif (Lebanon) and Quyet Chien Tran (Vietnam).

China - a duo consisting of Liu Haitao and Lu Haotian, ended the hopes of the Philippines (Warren Kiamco & Johann Chua) 9-6 in today's Semi-Finals, whilst Taipei pairing of Ko Pin-Yi and Cheng Yu-Hsuan dispatched Iran (Mohammadali Pordel & Mehdi Rasekhi) 9-3 in the other Last 4 match.

There are just two more days left for the Cuesports programme at these quadrennial Games, which as a whole also finishes on Tuesday.

The above pictures are courtesy of Ashgabat 2017.


Written and published by Michael Day on the 24th September 2017

Gold was secured after defeating somewhat surprise finalists Qatar. Vahedi took the opening frame with a singles victory against Ali Nasser Al Obaidli and then Vafaei doubled that advantage with success against former professional Ahmad Saif.

Hossein teamed up with Sarkhosh to win the doubles rubber and the overall tie 3-0, therefore the remaining singles fixtures were not required.

Earlier in the competition Qatar saw off a strong Thailand team made up of ex-main tour players Issara Kachaiwong and Thanawat Tirapongpaiboon 3-2 in the Last 8 and then arguably the event favourites China 3-1 in the Semi-Finals.​​​​​​