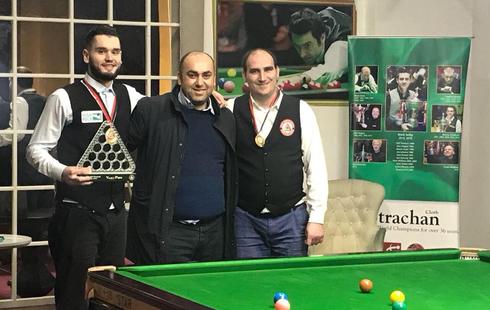 ​45 of the best players from Albania took part in the tournament that featured a 'Double Elimination' system up until the Quarter-Finals KO stage.

After eventually qualifying from the Losers Side, Kaci defeated Ronald Xoxi (4-1), Dorjan Maknori (4-0) and Edmond Zaja (5-3) in the Quarters, Semis and Final respectively. As well as the title, he also banked 1,000Euros.

On a global scale Kaci is better known for his American Pool skills. He sensationally topped this year's World Pool Series rankings after winning two of the four events staged in New York. The series - played to the 8 Ball discipline, featured many of the world's best players.

Snooker in Albania is definitely gaining momentum. The competition was organised by the Albanian Snooker Federation, of which Ogert Shkrepa is the President. Shkrepa said -

"The sport has developed fast in Albania. The tournament was shown on TV Tele Sport and approximately had 150,000 Albanian viewers. We also got more than 20,000 watching via our Facebook page.

Kaci is our best player. He has made a break of 125 in a tournament before on a Star Professional Snooker Table".

It is great to see another emerging snooker country holding competitive events. A big congratulations to the Albanian Snooker Federation!

Thank you to Ogert Shkrepa for his time and allowing me to use the image above.

Written and published by Michael Day on the 29th November 2017​