Magician Melling Conjures up Group G Win
All-time great Chris Melling is the penultimate qualifier for the quarter-finals of the inaugural Vinny Champions League Pool after he topped the latest group in the FreeSports televised event.

Fans were treated to a feast of high-quality and entertaining action at the Players Pool and Snooker Lounge in Newcastle-under-Lyme with all four competitors delivering the goods, but it was the odds-on group favourite Melling who emerged.

The evening began with a bang as Mike King recorded a near faultless display as he whitewashed promising teenager Geo Edgar 4-0 with two break clearances and a reverse break clearance – only a missed black in frame four denied King perfection.

Next on the baize was Melling, who started his campaign ideally with a break clearance in the opening frame, although his unfazed opponent Hiten Patel took the next two to take the lead. However, Melling would clear in frame four after Patel went in-off on the break, clear from his own break in frame five, and later secure maximum points with a 4-2 win.

Patel stayed on to face Edgar in a match that seemed to have it all. The 16-year-old Scot finally got to show his skill with two break clearances (one being a reverse) to go 2-0 up, before a run out of his own helped Patel square it at 2-2.

The Indian International then pounced on a mistake from the youngster to move 3-2 ahead, but Edgar kept his hopes alive by threading the cueball through a needle in frame six to pot a black he was snookered on. With the 20-minute match clock near expiration, Edgar nearly pulled off victory in a frantic seventh frame but both players had to settle for a point each.

The winners from earlier in the evening crossed cues next and would also share the spoils following a 3-3 draw. Both punished each other's errors in the opening frames and it was three-time world team championship winner King who held a 2-1 advantage.

Melling turned the tie in a matter of minutes with a reverse break clearance and a break clearance, but fellow Englishman King managed to hold himself together in frame six to level up with no time to complete the final frame.

For the first time in the competition, all four players could still qualify going into the final set of matches, and the possibility of a four-way tie at the top was thrown open when Patel bettered King 4-1 to move onto three points with both Melling and the player he had just defeated.

That result, though, meant that Melling would win the seventh group if he avoided defeat to Edgar in the final fixture. The former two-time WEPF world champion and Mosconi Cup MVP received a dream start with a golden break in the opening frame and was nearly at his best as he rattled off a 4-0 success inside just eight minutes.

The final qualifying group – set to involve current and six-time WEPF world champion Mick Hill - takes place on the 15th February. The grand final is scheduled for the 8th March where the winner will pocket a £10,000 top prize.

​Article written by Michael Day on the 1st February, 2021 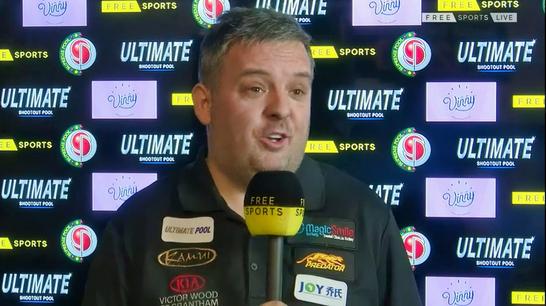