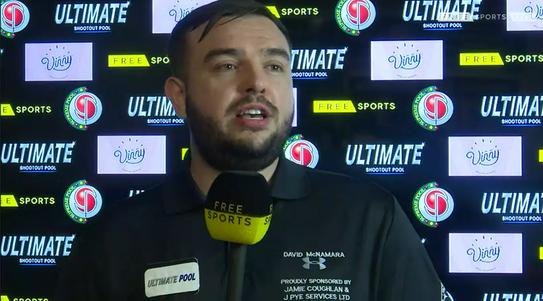 ​McNamara Masterminds Group F Qualification
David McNamara emerged from an entertaining evening’s play to win Group F of the Vinny Champions League Pool with a 100% record to qualify for the last eight of the competition next month.

We are heading towards the end of the opening phase in this unique FreeSports televised event where the winner will pocket a £10,000 first prize. Runcorn cueist McNamara joins previous qualifiers Josh Kane, Aaron Davies, Phil Harrison, Neil Raybone and Shaun Storry for the climax at the Players Pool and Snooker Lounge, and with just two more spots up for grabs.

The evening in Newcastle-under-Lyme began with Craig Lakin wrapping up a rapid 4-1 win over qualifier Tony Blount despite losing the first frame. A Players Amateur Championship winner at this venue in the past, Lakin wasted little time getting the result in just over 12 minutes.

Group favourite Karl Sutton took to the table next but he was outshone by McNamara, who laid down an early marker with a very impressive 4-1 victory.

Former EEPF European Champion Sutton stayed out for the next fixture against Blount and managed to eke out a 2-1 win after Blount – who showed flashes of brilliance throughout the night – squandered an opportunity in frame three.

The pinnacle match of the evening was between opening winners Lakin and McNamara. Former world under-23 blackball champion McNamara potted a beautiful long shot to help secure the first frame, but Lakin bounced back and was at his silky best when rattling off the next three frames in a row.

With fewer than seven minutes left on the match clock, the points seemed to be going to Lakin. However, ‘Deej’ had other ideas, crafting a break and clearance in frame five and – albeit with a slice of good fortune – taking an opportunity to level with frame six.

The excitement and drama didn’t end there, though. With only thirty seconds remaining, the only realistic way it couldn’t be a draw was if a golden break or duck was produced on McNamara’s break. Deliberately moving the cueball out wide and deploying a cut break to get the eight-ball moving, McNamara rolled the dice and came up trumps as the black ricocheted off balls and found its way to a middle pocket for the first golden break of the tournament. An incredible turnaround and extraordinary ending much to the amazement of those watching.

Still in with a chance, but with destiny out of their hands, a stunned Lakin and Sutton crossed cues next. Incredibly, Lakin was delivered another whammy as Sutton – almost laughably – began with a golden break of his own in frame one. After five weeks and 33 matches with no golden breaks, there were now two in consecutive frames. Lakin tried to recover and make things happen, but it was Sutton who kept his hopes alive with a 4-1 success.

Going into the final match, McNamara knew only a point was required to top the group. The already eliminated Blount came out with purpose, but his 26-year-old opponent made sure a six-red tiebreaker was not needed as he rubber-stamped a 4-0 win for maximum points.

Article written and published by Michael Day on 26th January 2020 ​