​I believe I predicted an 11-9 scoreline before the event started on Monday, and if it wasn't for a few crucial errors at critical times from Team USA, I may have been spot on.

One of the striking things about this year's Mosconi Cup, for me, was the amount of ties altered or decided by a mistake or a favourable roll. Neils Feijen's golden break at hill-hill with Shane Van Boening on Day 3 was a vital moment that sticks in my head. Had America's talisman taken that point, who knows what may have changed. But hey, that's 9 ball I suppose!

I think the USA acquitted themselves fairly well on the whole (Mark Wilson was an effective influence); but Europe thoroughly deserved their sixth consecutive success.

Feijen once again took home the MVP award for a record breaking fourth time in the last five years (surpassing Earl Strickland). He is simply rock steady and dependable in this unique team environment.

For the boys in red, Justin 'Iceberg' Bergman really impressed me. I had read an interview with Darren Appleton only last week on how he thought Bergman was America's second best player, and on this evidence, he should be in plenty more MC's to come.

Shane Van Boening's patchy record here continues though; perhaps the short quickfire races and doubles format are not his forte?

It was also ironic that the two rookies should play out the final rubber. I felt Albin Ouschan and Sklyer Woodward were breaths of fresh air, and held their nerves for the four days impeccably. I mentioned beforehand the difference in experience between the two newbies in regards to what they had done and won, but Woodward's selection was left totally justified.

Full credit to this year's audience at the Tropicana venue too. As described on commentary, the noise levels were at their strongest for a Stateside Mosconi ever. Hopefully this carries on for future editions.

Matchroom Pool have named the iconic Alexandra Palace in London as the host for next year's edition. The big, clean arena already holds sporting events such as darts, snooker and table tennis - it will be very well suited for 9-Ball Pool.

Europe's win yesterday also means they are only one behind their rivals on the overall stats list for the 22 year history of the Mosconi Cup (USA 11, Europe 10, 1 Tie), something which will surely be highlighted over the next few stagings...

Many thanks to Matchroom Sport for the above photo

Written and published by Michael Day on the 11th December 2015​ 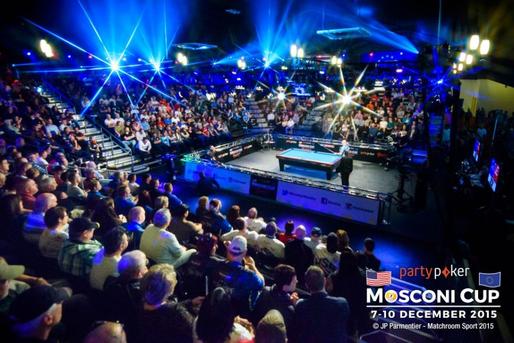