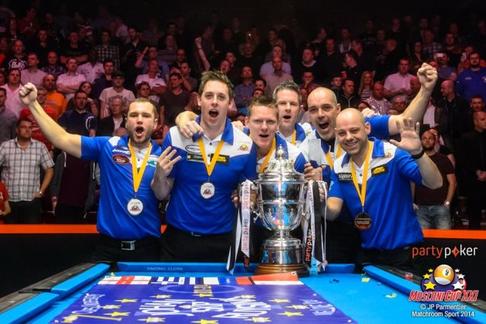 WHAT THE MOSCONI CUP MEANS TO ME

(from a slightly biased European point of view!)

Besides when the World 9 Ball Championship came to Cardiff (not far from me) for a short time, the Mosconi Cup was how I got introduced to, and fell in love, with 9 Ball Pool.

Living in England, my first cuesports affair was predictably with snooker. I had heard of American Pool, but never seen it played in a competitive environment. Then my parents thankfully got cable.

Every year I couldn't wait for the start of December (no, not just for the advent calendar chocolate by the way). I would look forward to seeing Davis, Strickland, Souquet, Archer and co. clashing for Atlantic Pool supremacy.

It was an atmosphere I had never seen before. It was different - loud, brash, colourful, people cheering, jeering, singing...high fives!

I had also presumed cuesports as a selfish and individual sport, where people worked for themselves; one versus the world. But this was a team event;  you weren't just playing for or representing yourself anymore.

It still had that one on one charm where there was nowhere to hide; yet the dynamics had changed - it was unique, and I have been hooked ever since.

Whilst the team sheets and performing casts have changed over the years, the rivalry remains the same...if anything, I think it's even more fierce now.

The MC has evolved a lot over the past 21 years. What started out as essentially an exhibition, has now turned into an extremely professional set up where players attempt to qualify all year round.

I guess one of my most vivid and enjoyable memories of the Mosconi was in 2002. Europe claimed the cup for only the second time; the previous occasion being back in 1995. It was also the first time I watched them win it live - there were years before when I thought they never would!

Don't get me wrong, I love watching Earl Strickland play, but I recall that unexpected miss on the green 6 ball in the last match, and then the ice cool Steve Davis mopping up for the title.

Coming from the more hushed world of snooker, I'm not sure 'The Nugget' (or The Romford Slim) knew how to react. He just kind of stood there, before being thunderously rugby tackled by the rest of his team. For the record, in Davis' autobiography, he labelled it as one of his greatest career moments.

For Strickland, who was the reigning World Champion at the time, it was a disaster, an embarrassment. Whilst it wasn't, he would have felt the defeat was his fault - that's the passion and responsibility of the Mosconi Cup.

In recent times, my viewing as a European fan has been very pleasurable indeed.

Whilst USA are still hanging on in the overall history stats, Europe have pretty much dominated in the last 8 editions - winning 7 of them, and including the last 5 on the bounce.

I don't confess being the most hardcore of American Pool pundits, especially from what's going on in the States, but to have such a swing is quite dramatic.

The last time the USA were hosts in 2013 it was the special 20th anniversary. In what started off as a joyous celebration for them, ended up as a humiliation of epic proportions. The Blues romped home to victory in a crushing 11-2 win; even leaving a day to spare.

Okay, before I get schooled by my transatlantic friends, USA have served up some beatings of their own, most notable a 12-1 destruction in 2001.

But in many ways, that was the catalyst for Team Europe to respond. A better selection process and set-up was implemented, and now they reap the rewards. The well oiled Euro Tour is also a factor in my opinion, as that's where our players predominantly hone their skills.

Although being abroad this time, Europe still start as favourites. They have a very settled team, with plenty of MC experience. Even their 'rookie' Albin Ouschan is a former World Finalist, World Number 1 and current China Open champion.

However, I do like the look of the American squad. It appears very balanced to me, with an ideal mixture of youth and experience. It should be, at least, competitive.

That said, I still predict an 11-8 scoreline to the champions!

Whatever happens, it will be exciting to watch. Without sounding nauseatingly over poetic here, cuesports are very human. The player's emotions are all there to see - and in the Mosconi Cup, they can often all spill out.

Written and published by Michael Day on the 2nd December 2015​