MD's BLOG - RONNIE, WHEN WILL WE SEE YOU AGAIN?

It was hardly a surprise that Ronnie O'Sullivan elected not to enter any of the events in the qualification triple header in Preston last week for India, China or Latvia. But as is so often the case for the last few years, we ask the question; when we will see Ronnie in competitive action again?

It is no longer headline news when the 5 times World Champion chooses to skip an event (or five).

With so many more tournaments to play in under the 'Hearn Era', O'Sullivan has a lot more freedom in selecting what he wants to play in. During those dark days with just 6 ranking events and a points based ranking list, O'Sullivan felt almost inclined to enter everything.

As with recent seasons, you can kind of predict when he is going to feature. Despite statements regarding thoughts of not appearing, he has always turned up at the Crucible for the World Championship.

There was a spell a few years ago when he seemed keen on entering the PTC's / European Tour events. He claimed these competitions were 'pure snooker', with little time or distraction between matches, and the whole thing being complete in just a few days.

Even last season he played in the unique Championship League Snooker at Crondon Park (maybe for match practice ahead of The Masters), a rapid league based format over only two days (per group).

O'Sullivan's 2015/2016 campaign did not start until just before Christmas. Due to not feeling prepared, he made the decision not to defend his Champion of Champions and UK Championship titles.

He played in just 6 tournaments - all of them in the UK. (German Masters qualifying was in England).

In fact, Ronnie has not played competitively outside of Europe since the 2014 International Championship in China.

We know how O'Sullivan enjoys the exhibition scene. He has a very busy schedule with the popular 'Snooker Legends' show, and has just embarked on a challenge series with Judd Trump - 'The Eleven30'.

​'The Rocket' currently stands 10th in the World Rankings - clearly he is not the tenth best player in the world, but that is the consequence of missing out so often.

However, his ranking could be a cause for concern in a few months time.

He had publicly said before that he wasn't too bothered about his ranking, and if he had to qualify for the World Championship, then so be it.

But because of the rolling two year money list system we now have in place, he is set to lose £150,000 of his accumulative total come the conclusion of the UK Championship. He beat Trump in that amazing final back in 2014 to lift the trophy for the fifth time.

Obviously, everyone else has money to defend too, but that makes up over half of Ronnie's two year total. If we were to take it away today, he would be left with £146,250 - down in 26th place. He also reached the Quarter-Finals of the 2014 International Championship, another £17,500 to take into consideration.

Because of a heavy money bias towards the World Championship, the Englishman has been completely safe in recent times courtesy of winning it in 2012 & 2013, and a runners-up finish in 2014. Quarter-Final and Second Round losses in 2015 & 2016 (which now count), though, put him in a far less certain position.

I shouldn't think O'Sullivan would lose too much sleep over it, but a couple of bad results in the events he does decide to enter soon, will almost certainly leave him outside the top 16. Unless he puts all his eggs in one basket, he will have to play in the first half of the season to stop this happening.

Just for the record, if ROS did fall out of the elite, his Masters spot in January is assured because of him being the defending champion.

So when will we see Ronnie again?​ We know for sure it can't be at least until the end of August for the Paul Hunter Classic in Furth.

From then until the UK at the end of November, there are another five ranking events - Shanghai Masters, European Open, English Open, International Open/Championship and Irish Open. Plenty of opportunity to pick up points.

He has only played in Shanghai twice in the last six years, but the bigger money International Championship (also in China) is likely to look a more attractive proposition should his exhibition diary allow it.

The brand new English and Irish Opens are part of this season's 'Home Series' along with the Scottish and Welsh Opens too.

Individually carrying £70,000 each to the winner, and being a UK based tournament, I would expect Ronnie to be present.

All 128 players go direct to the venue (no qualifying rounds), and it looks like you would have a match every day should you go all the way - he has been an ever present of the Welsh Open (apart from his 'year' off in 2013), so a format he perhaps like.

There is also the significant added bonus of a £1,000,000 payout if anyone can conquer the almost impossible; by claiming all 4. Something that might be enough to entice Ronnie!

The European Open is another new idea. Once again, the entirety of it will be played at the venue.

Staged in Bucharest, Romania, it is a venue that Ronnie has played in before for an exhibition with then World Champion Stuart Bingham. He enjoyed the enthusiasm of the audience and was overwhelmed by the demand for tickets. I guess entry to that could be a possibility too.

Written and published by Michael Day on the 6th June 2016​ 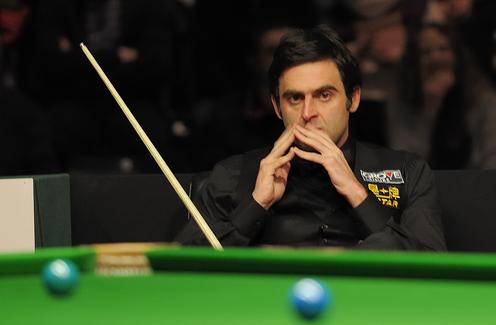