Who is the best player yet to (or never did) claim a UK, Masters or World Championship?

After 24 seasons on the professional circuit trying, 42 year old Joe Perry finally reached the final of one of the sport's 'Triple Crown' majors (UK, Masters or World Championship). Ultimately, despite a spirited effort, he fell just short in the final of the Masters last weekend to Ronnie O'Sullivan.

I believe for the first time in the event's history, every player who took part in the 2017 Masters had been a major ranking event winner. However, 7 out of the 16 of them have yet to lift one of snooker's before mentioned top trio of prizes - Marco Fu, Perry, Mark Allen, Liang Wenbo, Barry Hawkins, Ali Carter and Kyren Wilson.

3 time major ranking event winner Fu is the highest ranked (8th) of that group. The recent Scottish Open champion went into the Masters in sparkling form. Continuing the performance in London, it looked as if Fu's name could be on the trophy. But just like the story for so many other players, it was O'Sullivan who denied him.

​Hong Kong's Number 1 has reached the final 4 stage of each of the last 'Triple Crown' events (Worlds in April, UK in December, Masters in January). He was also a UK finalist in 2008 and a Masters finalist in 2011. Now aged 39, Fu still has a great chance if he maintains the very high standard he has shown in the last couple of months.

A Welsh Open, Shanghai Masters, German Masters and World Open Champion, Carter is the most decorated who is still currently active.

As we know, unfortunate health issues have hampered his career - this could very well have affected his chances of putting his name on one of those trophies. A World Championship runner-up in 2008 and 2012, both times his dream was dashed by.....you guessed it, Ronnie O'Sullivan.

Hawkins also falls into a similar category. The former Australian Open and Players Championship victor lost to ROS in the final at the Crucible in 2013 and Masters 2016. Carter and Hawkins are 37.

Allen and Wenbo are both previous UK Championship finalists. Aged 30 and 29 respectively, you think they will certainly have a few more opportunities to get it done. ​

Someone definitely with time on his side is Kyren Wilson, who at just 25, is easily the youngest of this group. Since his shock Shanghai Masters win in September 2015, he has been fairly consistent with a string of other latter stage results.

Looking further down the rankings, having just missed out on another Ally Pally appearance was Ricky Walden. A treble event winner in China before, Walden has yet to make a final in one of the big 3 in England. Aged 34, and after a good finish to the 2015/16 campaign, I expect Walden to break back into the World's Top 16 again at some point soon.

Other than Walden, the only other multiple time major ranking event winners still on tour are Dominic Dale and James Wattana. Both still very capable on their day, their chances would be classed as slim with both being in the second half of their forties.

There are a number of single time major ranking tournament champions outside the current Top 16 who fit into this discussion. Anthony McGill, Martin Gould, Mark King, Michael White, Fergal O'Brien and Nigel Bond. With no disrespect, White, McGill and Gould are surely the most likeliest.

Looking at past seasons and into the history of snooker, once again, there are players you may have thought were worthy of one of these prizes.

Statistically the most successful player to have never won a Triple Crown title is Stephen Lee; before his ban from the sport he had notched up 5 major ranking competition victories.

Tony Knowles - a former World Number 2, was a dual champion, but never actually got into a TC final. Knowles and Carter (who also reached Number 2) are the highest ranked players never to have lifted the UK, Masters or Worlds. Wattana and Neal Foulds were World Number 3s.

Stars from the 'Golden Era' of the 1980's, famous names such as Kirk Stevens, Willie Thorne, David Taylor, Mike Hallett and Bill Werbeniuk never achieved it. Looking even further back, great names such as Eddie Charlton, Rex Williams and Graham Miles didn't either.

So, who will be the next new winner of a 'Triple Crown' event?

Will it be someone mentioned earlier in this article, or could it be someone searching for their maiden ranking event altogether - one of the young overseas players? Or maybe that person isn't on the professional tour yet.

The last 'new' winner of a Triple Crowner was Stuart Bingham at the World Championship in 2015. Before him in this decade were Judd Trump (2011) and Neil Robertson (2010).

David Caulfield from the fantastic 'SnookerHQ' website/blog asked a similar question in regards to the next 'new' World Number 1 recently. There is every chance these two questions could be answered with the same player - we wait and see.

Written and published by Michael Day on the 28th January 2017 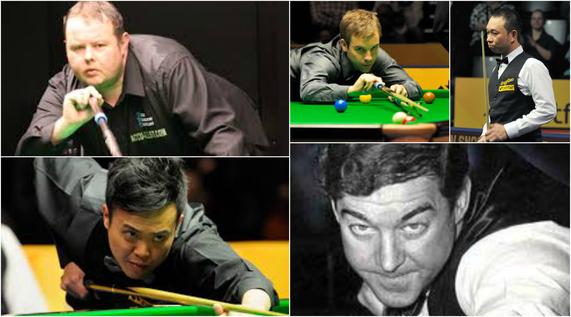