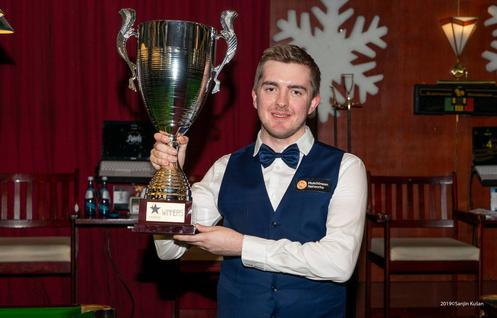 This established pro-am event this year featured 60 players who represented 14 different nations from across Europe and beyond. The opening days were devoted to the round-robin phase from which all of the likely tournament winning candidates progressed.

Scotland's Muir topped his group by winning all three fixtures, 2-0. Then in the straight elimination section he defeated Thomas Brünner (Germany) 2-0, Majid Gharehgozlou (Iran) 3-0 and Amir Nardeia (Israel) 3-1 in the last 32, 16 and quarter-finals respectively.

In the semi-finals he dethroned defending champion and fellow professional Lukas Kleckers (Germany). Kleckers was on the brink of victory when he led 3-1, but a tournament high break of 142, and then a 106, helped Muir force a deciding frame, from which he managed to get through into the final.​

Joining him there was home nation favourite Andreas Ploner, who ousted current main tour player and 2017 champion Alexander Ursenbacher (Switzerland) in the last 4, taking the final two frames to advance via a decider.

Ploner began the final impressively, crafting a break of 84 to chalk up the opening frame. However, he would be denied the title as he watched Muir register runs of 124, 62 and 139 in emerging as a 4-1 victor.

The picture above is courtesy of Sanjin Andy Kusan, via @justlikepictures on Facebook.

Article written and published by Michael Day on 7th January 2019​​​​