O'CONNOR IS THE ENGLISH AMATEUR CHAMPION

Joe O'Connor signed off his amateur career in style by claiming the 2018 English Amateur Snooker Championship title. It is 22-year-old O'Connor's maiden victory in the sport's longest running and oldest event - this prize was first contested for in 1916.

After the regional and zonal rounds had been completed earlier in the season, the four remaining players traveled to the South West Snooker Academy in Gloucester for the English Association of Snooker and Billiards Finals Weekend where several tournaments discovered their winners.

​On Saturday, SWSA resident Andrew Norman ousted fellow ex-professional Jamie O'Neill 8-7 to win the Southern Area Championship. For Norman, it would be his second appearance in the final, 19 years on from his first in 1999.

There was a debut finalist guaranteed from the Northern Area decider as O'Connor defeated Farakh Ajaib 8-5.

Streamed live on YouTube, O'Connor made a bright start to the final with a break of 93. He doubled his lead after chalking up a scrappy second frame on the black and then produced another gut-wrencher to his opponent when taking the third by the same outcome.

Norman was aided by a run of 67 to get on the board with Frame 4, he then returned from the mid-session interval to reduce his arrears to 3-2. However, this was the closest that Norman would get.

​Highlighted by efforts of 61 and 49, O'Connor won the final four frames of the opening session to create a 7-2 profit. On the resumption, former World Number 42 Norman threatened a recovery with success in Frame 10, but he missed a tricky frame ball pink across the top cushion when hampered in Frame 11 - a mistake which was pounced on. The next two frames were also deposited by O'Connor, who sealed a 10-3 win.

The Leicester-based youngster will be making his debut as a professional this upcoming campaign having qualified via the EBSA Play-Offs in April.

Elsewhere at the venue, it was a memorable few days for Ryan Davies who completed two unique doubles. The talented, multi-disciplinary cueist won the Under 16 and Under 18 Championships in both Billiards and Snooker. Davies is also a current National Under 18 English Pool Champion.

​Louis Heathcote came back from the brink of defeat to pip Callum Costello 8-7 in the final of the Under 21 Championship. At 7-6 behind Heathcote required a snooker but obtained the penalty points, secured the frame, and then took the decider. Like O'Connor, Heathcote is also from Leicester.

Steve Whalley denied Bill Cornish 5-1 in the Over 55s Final.

​The picture above is courtesy of Joe O'Connor. 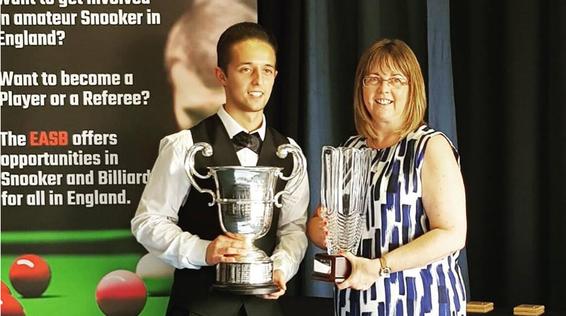